Universal Life Church Files Lawsuit Against Bucks County Clerk, Alleging That Their Ministers are Being Denied the Right to Freely Practice Their Religion

The Universal Life Church Ministries on Tuesday filed a Federal lawsuit against Bucks County, Pennsylvania alleging that one of its ministers was told he could not practice his religion and solemnize a legal wedding ceremony because of the source of his ordination. 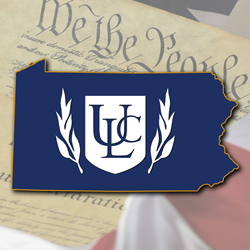 The Universal Life Church Ministries filed a Federal Lawsuit Against the Clerk for Bucks County, PA on Tuesday

In its complaint, ULCM asserts that in denying the rights of its minister, the Bucks County Clerk has violated the Establishment, Free Exercise, and Equal Protection clauses of the U.S. Constitution.

The Universal Life Church Ministries (ULCM) on 16 February filed a Federal suit against officials for Bucks County, Pennsylvania alleging that the church’s ordained ministers have been denied the right to perform legally binding religious wedding ceremonies. The case (No. 2:21-cv-00700) is before the United States District Court for the Eastern District of Pennsylvania.

ULCM is joined in their lawsuit by one of its ordained ministers, who alleges he was told by County officials that he could not officiate legal wedding ceremonies specifically because he was ordained through the internet. In the lawsuit, ULCM and the other plaintiff ask the court to confirm that ULCM ministers may solemnize legal weddings under Pennsylvania law.

In its complaint, ULCM alleges that in denying the rights of its minister, the Bucks County Clerk has violated the Establishment, Free Exercise, and Equal Protection clauses of the U.S. Constitution. They ask the court for an injunction against the Bucks County Clerk that would prohibit them from continuing to discriminate against ULCM ministers.

The Universal Life Church Ministries is one of Earth’s largest religious organizations, having ordained more than 20 million individuals. The Church was founded on the belief that “we are all children of the same universe” and is welcoming of people from all denominational backgrounds. It asks only that its adherents abide by two tenets: 1. Do only that which is right, and 2. Every individual is free to practice their religion however they like as long as their actions do not impinge upon the rights or freedoms of others and are in accordance with the law.

The ULCM is perhaps most widely known for its provision of religious ordinations over the internet. ULCM Ministers perform weddings, baptisms, funerals, and other types of spiritual ceremonies, in addition to conducting general church services and ministering to their communities.

The Universal Life Church Ministries and its ministers are represented in this case by Davis Wright Tremaine LLP.