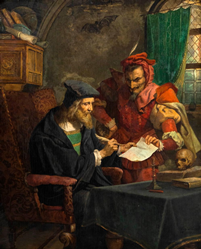 (After 9/11) I noticed this instantaneous reaction where a society that values individual choice was very quick to be willing to give up some civil liberties to the government in the Patriot Act that called for increased surveillance. That is a fundamental Faustian bargain on steroids.

People value their right to make choices in life. However, in order to obtain important goods, services and protection, they are willing to give up some of that individual autonomy to government leaders, employers or others.

University of Louisville brain sciences researchers Daniel DeCaro and Marci DeCaro, who explore how people learn and make decisions, have published new research that reveals important factors that lead people who initially prefer personal choice to yield that authority to others. They found that people are more likely to yield decisions to others when they believe the others are more qualified to make choices that will prevent severe losses and increase economic benefit.

“It’s a fundamental aspect of human nature and society that we give up a little bit of our freedom of choice and authority in exchange for things we need for survival,” said Daniel DeCaro, associate professor in UofL’s Departments of Psychological and Brain Sciences and Urban and Public Affairs. “When you're trying to weigh options, those options differ in terms of levels of freedom of choice and economic outcomes and security. This study helps us understand the actual trade-offs that might be happening in people's minds and the mindset they get into when they're making this kind of Faustian bargain.”

A Faustian bargain is when a person exchanges something of supreme moral value for a material benefit. The concept is based on the medieval legend of Faust, who traded his soul to the devil in return for knowledge and power. Daniel DeCaro is interested in understanding instances when an individual trades freedom of choice for economic benefit.

To understand at what point people are willing to make this exchange, the researchers developed a unique series of card selection tasks in which individuals can choose to make their own decisions or yield decisions to an individual they believe will choose more successfully. They recruited 77 young adults to participate in the study, which offered the opportunity for financial gain if they made correct choices. The participants could choose between two “managers” to work with them on the tasks: One manager allowed them to choose responses for themselves and the other instructed them in their choices.

When the card tasks were easy and the participants were successful, they were more likely to choose the choice-friendly manager and make selections for themselves. When the tasks were more difficult and their gains changed to losses, their preference shifted to the manager who chose better selections for them, even though the manager was coercive.

DeCaro said it is important for people to recognize this tradeoff when they are making important life or moral decisions such as employment, government leadership and public policy.

“It’s helpful for people to recognize when they're in this type of situation and put a name on it so they can step back and think a little more carefully,” he said. “You're explicitly trading off some sort of freedom for some economic exchange and it’s important to stop and decide if it is appropriate.”

DeCaro originally became interested in decision science as an undergraduate student around the time of the 9/11 terrorist attacks.

“I noticed this instantaneous reaction where a society that values individual choice was very quick to be willing to give up some civil liberties to the government in the Patriot Act that called for increased surveillance. That is a fundamental Faustian bargain on steroids,” he said. “Scholars are saying that we probably weren't as careful as we should have been, because once you strike these Faustian bargains and they get codified in law and social norms, it becomes the new status quo. And then it's very hard to change it.”

The study, "Formalizing the fundamental Faustian bargain: Inefficacious decision-makers sacrifice their freedom of choice to coercive leaders for economic security," was published in the journal PLOS ONE. In addition to Daniel DeCaro, authors include Marci DeCaro and Rachel Appel of UofL and Jared Hotaling of the University of Illinois at Urbana-Champaign.

In designing the research, the investigators collaborated with Hotaling to develop an innovative cognitive model that combines two established concepts. Economic theory would predict that people always choose economic gain over loss. On the other hand, procedural justice theory says people most value freedom and always will prefer to choose for themselves. Neither theory accurately predicts how people make decisions in life, particularly in cases where the two values (freedom, economics) are pitted against one another, such as when exercising personal freedom carries the risk of economic loss. The cognitive model takes both concepts into account and tests the factors that lead a person to change their initial preference for freedom. They find that economic losses capture attention, causing individuals to focus on economic survival more than their own freedom.

In future research, the team plans to test how responses differ in different groups based on important factors that are known to affect attitudes toward personal and cultural authority and economic survivability, such as race, socioeconomic class and gender. They also plan to include individuals from diverse cultural backgrounds who would have different starting points in their preference for choice.

Get more news from UofL delivered straight to your inbox by signing up for our UofL News Roundup here: uoflalumni.org/uoflnews-signup.