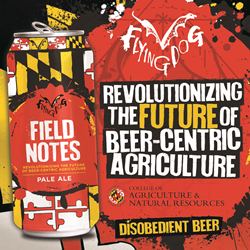 “There’s no better way to evaluate hops than putting them in a beer, which is exactly why experimental projects like Field Notes are vital to our work with the University of Maryland." - James Maravetz, VP of Marketing, Flying Dog Brewery

Flying Dog Brewery today announced the 2020 release of Field Notes Pale Ale, a beer created in partnership with the University of Maryland (UMD) College of Agriculture and Natural Resources. Flying Dog and UMD have been working hand-in-hand for the past 5 years on the future of beer-centric agriculture in the State of Maryland.

Field Notes, brewed using hops grown at UMD’s Western Maryland Research and Education Center in Keedysville, MD, is a crisp and delicious 5.6% pale ale with fruity and citrus hop notes dominating both the aroma and flavor profile. The hops used - Lyon, Glacier and Southern Cross – were chosen after three rounds of blind sensory analysis on the hop varieties harvested by UMD this year.

“There’s no better way to evaluate hops than putting them in a beer, which is exactly why experimental projects like Field Notes are vital to our work with the University of Maryland,” said James Maravetz, VP of Marketing, Flying Dog. “There are no pilot or test brews for this beer, it is a one-time shot to see what notes shine through.”

UMD and Maryland’s largest independent craft brewery have been growing hops in Maryland since the organizations’ partnership began in 2015. At that time, UMD’s College of Agriculture and Natural Resources partnered with Flying Dog to study hop production in the State of Maryland. The goal of the study was to gather research and lay the groundwork for a commercially viable hop producing industry in Maryland that mirrors the success of hop growing ventures in the Pacific Northwest.

“Over the past five years we have battled various obstacles, both environmental and manmade, and it is evident that we can produce hops in Maryland,” said Bryan Butler, Extension Agent, UMD College of AGNR. “The question that remains however is, can a consistent, high quality, profitable crop be produced? We look forward to continuing our work to determine the ultimate answer to that question.”

24 hop varietals have been studied to try to identify the strains best suited for production in Maryland’s climate, and to determine the potential challenges Maryland growers may encounter along the entire production chain – from growing to harvesting to processing.

Looking ahead to the next phase of the project, the team will narrow their focus to the 6 most promising strains of hops, work on genotyping a hop that may be native to Maryland, and launch a new course of study at the University of Maryland focused on fermentation.