UMd Extension is working with state agencies to take the invasive blue catfish from the Chesapeake Bay tributaries, and put them on the plates of Terps and Marylanders as a new, healthy dietary option. 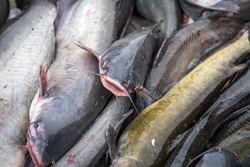 Blue catfish are low in calories, high in protein, and provide a significant amount of healthy fats.

Since a recent purchasing agreement by state agencies made it possible to sell the invasive blue catfish to state institutions, Cathy Liu and Erin Carney of the University of Maryland Extension have been working together, and collaborating with state agencies, to develop consumer education programming and events to enhance public awareness about the safety and nutritional value of the fish.

While little data currently exists on the official nutritional values of blue catfish fillets, Carney’s current research includes preliminary work on understanding what the blue catfish can contribute to a healthy diet. She and Liu are also developing a fact sheet for consumer education, providing prepping and cooking instructions for safe and healthy consumption, and encouraging more Marylanders to assist in reducing invasive catfish populations in the Bay.

“Our future plan is to continue and expand upon the collaborative efforts of state and local organizations,” said Liu, seafood safety specialist with University of Maryland Extension Sea Grant, who delivers safe seafood handling techniques to commercial production professionals throughout the state. “We will offer more educational and interactive events to promote safe consumption of invasive fish species. Blue catfish is not only delicious, but also safe and nutritious.”

“We will also seek funding to conduct research and fill the gap of nutrition and safety data,” Carney said. “It is critical to collect these data and make them available to the public for safe consumption and local buy-in to occur.”

Liu has worked extensively with the commercial fisheries providing catfish and other seafood products, and has examined levels of microbial contamination as well as safe processing and handling procedures. Consumers are misinformed about the level of contaminants such as methyl mercury and PCBs (polychlorinated biphenyls) in seafood, she says, and that has created confusion around the health benefits of eating fish and other seafood products.

“Americans don’t consume enough seafood to begin with,” says Liu, “so they definitely aren’t eating enough to have any potential side effects from chemical contamination.”

Introduced into Bay tributaries by sports fishermen from the 1960s to the 1980s according to the Maryland Department of Natural Resources (DNR), blue catfish are a threat because they have the potential to cause environmental and economic degradation to native species. In September, DNR, in partnership with the Departments of Agriculture and General Services, created a program allowing the sale of Maryland-harvested blue catfish to state institutions, including the University of Maryland.

UMd Dining Services was looking for new choices and healthy options to offer on campus, and the fact that serving catfish would be helping in the effort to eliminate this destructive species from local waters, made selecting blue catfish for the menu an easy choice.

“We were approached by the Wide Net Project about the increased and excessive catfish in the Bay,” said Bart Hipple, Assistant Director of Dining Services at the University of Maryland. “They were aware that we were working on the sustainability of our operation and thought we might be a good partner in this.”

During the Fall 2018 semester, an estimated 4,810 pounds of blue catfish were served to UMd students in the dining halls, in many different ways, said Hipple. “At the same time that we introduced the catfish, we also increased overall seafood options,” he said. “The catfish is very popular.”

In fact, the 2015-2020 Dietary Guidelines for Americans recommends that adults consume at least eight ounces of seafood a week, said Erin Carney, a Family and Consumer Sciences agent with Extension, who is partnering with Liu on the development of course programming.

“According to the U.S. Department of Agriculture Research Service’s National Nutrient Database, blue catfish are low in calories, high in protein, and provide a significant amount of healthy fats, making it a healthy choice to consider,” she said. “However, nutrient content can vary based on the season, size, age, and portion of the fish. There is limited data for nutritional composition of local catches.”

The blue catfish is not native to the Bay or its tributaries, but its origination is from the southeastern United States and local fishermen have been catching and eating the species for many years, which means there is variety of resources online for prepping and cooking fillets. The Maryland state website offers recipes and resources including a recipe for blue catfish tacos from Baltimore’s Chef Chad Wells, corporate chef for the Victoria Restaurant Group.

For more information on the blue catfish and the history of its introduction into Bay waters, go to the Department of Natural Resources website.