The largest public music program in the nation is now getting broader, deeper support from the largest musical instrument manufacturer in the world. 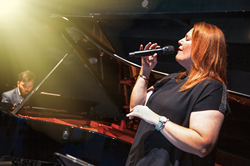 “This year’s Gala bolstered our student scholarships and program resources tremendously, and Yamaha was a big part of that success. We are profoundly grateful!” said John W. Richmond, Ph.D., professor and dean, University of North Texas College of Music.

The University of North Texas College of Music, the nation’s largest public music school, held its Variant: Gala 2019 this past weekend, receiving a huge boost from Yamaha, which served as the presenting sponsor for the event.

Top officials from the world’s largest musical instrument manufacturer were in attendance, having collaborated with the college in making the Gala a wildly successful fundraising effort for the school’s scholarship fund. This marked the first time that Yamaha has worked with the college as more than a source of fine instruments of many years’ standing.

John W. Richmond, Ph.D., professor and dean of the College of Music, remarked, “This year’s Gala bolstered our student scholarships and program resources tremendously, and Yamaha was a big part of that success. The new scope of our relationship with Yamaha comes as a major boost in fueling the education of the more than 1,600 gifted young musicians who pass through these halls every year. We are profoundly grateful!”

On top of partnering in the fundraising effort, Yamaha enlisted the support of the company’s local dealer, Metroplex Piano of Plano, Texas to provide all pianos for the entire celebration, including a Bösendorfer 280VC Vienna concert grand for the Gala’s featured symphony concert. Those attending the VIP reception were entertained by a Disklavier DCFX reproducing piano played by Michael Clement, Yamaha Award winner at this year’s American Jazz Pianist Competition held in New York. As Clement performed onstage, his exact keystrokes and pedaling were reproduced in real time via MIDI on a Disklavier DC3X located remotely in the reception hall foyer, providing an exact reproduction of his original performance, which was accompanied by a student guitarist.

Another highlight of the event was a performance by the One O’Clock Lab Band, one of the nation’s top big bands directed by Dr. Alan Baylock and comprised entirely of College of Music students, with a Disklavier DCF6 ENSPIRE as part of the lineup. Several professors joined the famous band as featured soloists onstage, including Yamaha Piano Artist and UNT piano faculty member Dave Meder.

Yamaha Piano Artist Addison Frei also made a guest “appearance” — a video appearing on a screen above the band showed him performing on a remote piano, which was synced up to his actual performance on the Disklavier DCF6 onstage. This technology gave the illusion that Frei was “hacking into” and taking over the onstage piano.

In addition to pianos, Yamaha supplied all sound reinforcement gear used in every aspect of the Gala from concert to reception to final speech, including an array of both Yamaha and NEXO speakers plus Yamaha CL5 and QL5 mixing consoles. The Yamaha audio team was assisted by partner production company Spygoat Productions of Dallas.

“As Yamaha intensifies its focus on institutional relationships, this enhanced collaborative effort with the University’s College of Music comes as a major step forward for us and our mission in support of music education,” said Tom Sumner, president of Yamaha Corporation of America, who also attended the Gala. “It is quite gratifying to be taking this larger role in supporting the University, and we look forward to exploring other avenues of working together in the future.”

For more information about the University of North Texas College of Music, visit https://music.unt.edu/