20 Artists Join Song Along With Fans From Around The World 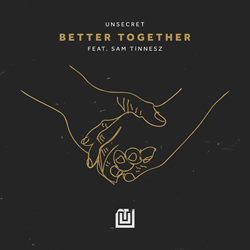 I think the song captures what we are all longing for in this moment of separation. Everything is better together.

UNSECRET, known for crafting songs heard in major films and television shows, and Warner Music Group’s ADA artist, Sam Tinnesz, bring together 20 artists, world class musicians and fans from around the world for the Rolling Stone, Forbes and Heartland TV featured anthem "Better Together." The song is available now at digital and streaming outlets globally through the link, https://stem.ffm.to/bettertogether.

Written by UNSECRET and Tinnesz via Zoom April 8 and recorded remotely, including the companion video, “Better Together” speaks to people’s fears and the importance of community as it shines as a beacon of hope amidst the world’s battle with COVID-19 and racial tensions.

Best known for their dark-themed, hard-hitting music, the quarantine and isolation offered UNSECRET and Tinnesz a new muse: togetherness. The verses of the song could still reflect the difficultly of the times, but they wanted a chorus charged with positivity.

“We need music that brings us together, makes us feel like everything’s OK,” Tinnesz says in a recent Rolling Stone feature. “People I know, no matter what kind of music they usually create, are all trying to find ways to put threads of hope [in songs] for people dealing with all this COVID separation.”

Rolling Stone adds, “The acoustic track moves from a glum verse — Feeling lost when you’re away/And now it feels like a thousand days — to a thumping, sun-bursts-through-the-clouds hook: It’s better when we’re together/These are the moments that take me home.”

Paradoxically, “Better Together” was all recorded separately, with Nashville session player Todd Lombardo recording the acoustic guitar, electric guitar and banjo, which became the foundation of the musical track. Next came drums with Miles McPherson followed by bass with Tony Lucido, each recording from their homes.

Along with the lead vocal by Tinnesz, Ruby Amanfu and Sam Ashworth (known for their work with the artist H.E.R.) remotely added layers of vocals that provided a “virtual choir.” From there, all the vocals and instruments were pulled together by seasoned alt-rock mixer Chad Howat.

“We wanted the music to reflect the lyric’s spirit of togetherness, but the quarantine kept us from gathering in a studio,” UNSECRET told Forbes. “Fortunately, the session players were able to add their parts remotely, making the finished song sound like we’d all been performing in the room together. In some ways, it was the perfect expression of what the song is about: finding ways to stay connected even while we are forced to be apart.”

In that spirit of finding meaningful ways to connect during quarantine while longing for real connection in the future, UNSECRET and Tinnesz further gathered 20 artists along with fans from coast-to-coast across the US and across the world, including from Sweden, Brazil, Romania, Germany, Italy, India and Ukraine, to participate remotely in the “Better Together” video. The resulting video can be seen now at https://youtu.be/zvmJK52Inrc, was produced by Sean Hagwell and has been shared by fans and companies like Shure Microphones, JH Audio and Stem.

As the world finds itself interconnected in so many ways, and with virtually everyone dealing with this pandemic, “Better Together” is resonating with people across demographics, musical preferences and racial divides. Some are sharing it as a song for their friends that they are missing, and at least one high school is doing a version of the song at the end of this school year to celebrate the future that is ahead.

“There have been more shares and interaction with this song than I’ve seen across 50 million streams of my song ‘Play With Fire [feat. Yacht Money],’” says Tinnesz. “There is honesty in the verses, then a universal hope in the chorus. I think the song captures what we are all longing for in this moment of separation. Everything is better together.”

About Sam Tinnesz:
Sam Tinnesz is originally from Atlanta, but has now lived in Nashville for 15 years. Signing his first record deal with Curb Records before graduating college, he toured for over eight years all around North America. In his mid-20’s, he decided to leave the road and start writing exclusively. He went on to become an integral part of the team that developed Ruelle, who in 2018 was Billboard’s No. 1 most synced artist. He also wrote with and co-produced artists like Banners, Andreas Moss, Daniella Mason, Fleurie and Erin McCarley, and is a featured vocalist on the new Kygo album released May 29. Now stepping back into his own solo career, he’s found success landing songs on the Spider-Man: Homecoming trailer as well as on Jeep, Toyota and Samsung Galaxy ads along with many other network shows. Amassing over 70 million streams on his latest independent LP, he is now signed to Warner Music Group’s ADA and will release a new album later this year.

About UNSECRET:
Beginning in 2016 with “Point Of No Return” featuring frequent-collaborator Sam Tinnesz, UNSECRET has begun amassing songs that have been showcased in Netflix’s The Witcher and Seven Seconds, 20th Century Fox’s The Darkest Minds and Gears 5 XBOX trailers, as well as How To Get Away With Murder, Station 19, Grey's Anatomy, Nancy Drew, God Friended Me, Motherland: Fort Salem, The Rookie, Batwoman, Charmed, American Ninja Warrior, UFC and many more TV shows and theatrical films. Featuring artists like Ruelle, Fleurie, Matthew Perryman Jones, Young Summer, Ivory Layne, Neoni, Butterfly Boucher, Alaina Cross, Vo Williams, Ruby Amanfu, Katie Herzig, Erin McCarley and others, UNSECRET’s growing catalog spans electronic, cinematic pop, alternative and more musical genres. While the identity of this mysterious musical juggernaut, whether an individual or a collective, is not known, an ever-evolving palette of sounds has been produced, capturing the ears of music fans around the world.