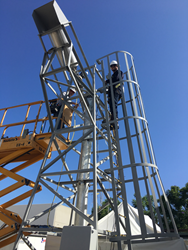 Upwing’s SCS is a high-speed downhole compressor system with a compressor rotor levitated by magnetic bearings and driven by a permanent magnet (PM) motor. The system increases gas production and recoverable reserves by enabling greater drawdown close to the wellbore.

“The new flow loop allows us to rigorously test and validate Upwing’s SCS capabilities, giving us more expertise on the performance of the system in a wide range of conditions,” said Herman Artinian, President and CEO of Upwing Energy. “This is even more important at a time of increasing reservoir complexity and rapidly changing well conditions.”

For testing, Upwing’s SCS is placed vertically in the air flow system that mimics the flow rate, temperature and pressure level of the client’s live gas well. All SCS units are tested in the flow loop for a minimum of 72 hours with the client’s simulated conditions before being shipped to the actual well site.

The autonomous intelligent control system adjusts the system’s speed and power based on the compressor map and flow conditions and enables 24/7 unmanned complete system level testing. In the field, the control system optimizes the performance and reliability of the SCS in-situ without the delay of decision-making and manual control by personnel located remotely.

Upwing is currently able to introduce up to 200 bbl of equivalent liquid per 1 mmscf into the flow loop and will have the ability to introduce mixtures of sand and solids in the near future.

Upwing’s test facility also has test cells that are used to verify and validate the mechanical integrity of its subsurface compressors. Upwing engineers use the test cells to validate each module independently, measure system performance and operationally characterize the SCS magnetic components within the full assemblies. This characterization allows for the creation of a unique performance map that can be used for diagnostic and prognostic health monitoring once the unit is installed in a client’s well.