Upwing Energy, an artificial lift technology company, announced today that it has successfully completed a field trial of its Subsurface Compressor System™ (SCS) in a liquid-loaded unconventional shale gas well owned by Riverside Petroleum in Indiana. The first full-scale commercial field trial of the SCS resulted in a 62 percent increase in gas production and a 50 percent increase in liquid production over its steady-state performance with a rod pump prior to the SCS installation. 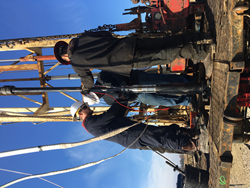 The Upwing SCS is installed in a shroud, which carries the weight of the 1,000-foot tail pipe in the horizontal section of the well.

Upwing Energy, an artificial lift technology company, announced today that it has successfully completed a field trial of its Subsurface Compressor System™ (SCS) in a liquid-loaded unconventional shale gas well owned by Riverside Petroleum in Indiana. The first full-scale commercial field trial of the SCS resulted in a 62 percent increase in gas production and a 50 percent increase in liquid production over its steady-state performance with a rod pump prior to the SCS installation.

Upwing’s SCS is a high-speed downhole compressor system that increases gas production and recoverable reserves by decreasing bottom hole flowing pressure and causing higher reservoir drawdown. The SCS carries liquids to the surface by creating higher gas velocities throughout the vertical and horizontal wellbores and prevents vapor condensation by increasing the temperature of the gas when exiting the compressor.

“Upwing has the technology and system-level integration capabilities to not only make a step change in the reliability and economic feasibility of downhole artificial lift systems, but also to recover significantly more gas and liquids from reservoirs than has been possible previously,” said Herman Artinian, President and CEO of Upwing Energy. “We greatly value our partnership with Riverside Petroleum. In addition to providing us with a trial well, they have been extremely supportive throughout the evaluation, deployment and trial process.”

“By lowering bottom hole pressure beyond what is feasible for gas wells today, the subsurface compressor provides us with not only incremental production, which directly relates to higher cash flow, but also increased recovery rates, which increases company equity,” said Bob Van Hoy, Chief Operating Officer of Riverside Petroleum. “We look forward to working with Upwing to increase the production and value of our assets.”

This was the first time a system comprised of a high-speed permanent magnet motor, magnetic coupling, passive magnetic bearings with electronic dampers and sensorless high-frequency controls has been deployed successfully in the downhole environment.

Upwing’s SCS was deployed in an unconventional well with a 2,000-foot vertical wellbore and a 5,000-foot horizontal wellbore, where liquid had accumulated. The compressor was installed at the bottom of the vertical section with a tail pipe extending approximately 1,000 feet into the horizontal to provide enough velocity to carry liquids while minimizing friction losses. The installation was very similar to electric submersible pump (ESP) systems in that the SCS unit was tubing deployed, and the electrical cable with the instrumentation was secured around the tubing. The trial period started at the end of October, and the SCS was pulled out in early December.

When the SCS operated at 30,000 RPM, the gas velocity increased to 29 feet per second, and a high rate of liquid was carried to the surface. The hybrid axial compressor was able to atomize the liquid into a very fine mist, which together with the increased velocity and heat generated from the exit of the compressor helped carry the liquids to the surface. The compressor blades showed no sign of degradation despite moving a significant amount of liquids.

Upwing is using the lessons learned from the trial to further harden the system, and will be increasing the capacity of the SCS by over five times in its next phase of field testing with partners later this year.

“We look forward to continuing to work with the Riverside Petroleum team to test the SCS in their higher production wells before rolling out the product commercially,” said Artinian.

Riverside Petroleum Indiana LLC (“Riverside Petroleum”), a member of the Riverside Energy Group, owns and operates 30 New Albany Shale natural gas wells in southwest Indiana, producing more than 4,000 Mcf per day natural gas. The wells, associated processing facilities and pipelines are situated within a mostly undeveloped leasehold of nearly 200,000 acres, with significant gas PUD and oil potential. Riverside Petroleum is managed from The Woodlands, Texas, by the Umbono team and operated by a field team based in Washington, Indiana. For more information, please visit http://www.riversideenergygroup.com.