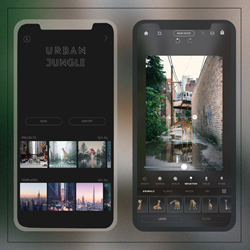 Urban Jungle is unlimited creative inspiration and expression. Anyone can become a mobile artist thanks to our tutorial blog and intuitive app design.

“I’ve used BrainFeverMedia apps religiously throughout my career, so when James approached me with the idea to collaborate, I immediately jumped at the opportunity,” said Elise Swopes, owner of Urban Jungle. “My purpose as an artist is to share the secrets that made me become the successful artist I am today in hopes it can inspire others can do the same. Urban Jungle is a product of just that.”

Users can load photos from their Apple device, select Project or Template, and start editing away using a variety of layers and filters to enhance the concept. Nature images such as animals, waterfalls, and plants can be blended in using the editing tools to create beautiful forms of art. Users can save, export, and share projects with friends.

Swopes has hosted Ted Talks, worked with Adidas, Adobe, Apple, and multiple other brands and businesses. Together with the BrainFeverMedia, Swopes created an app that utilizes the same tools that made Swopes an internet celebrity and successful entrepreneur.

“Most photo editing apps are limited to standard tools,” said Swopes. “Urban Jungle is unlimited creative inspiration and expression. Anyone can become a mobile artist thanks to our tutorial blog and intuitive app design.”

Urban Jungle is available in the Apple app store with a free version and paid version of $19.99. It is compatible with the iPhone, iPad, and iPod touch. You can download the app here.

Urban Jungle app is a collaboration between internet celebrity/influencer Elise Swopes and BrainFeverMedia. Based in Williamsburg, New York, Swopes became an Instagram sensation for her photo art in 2010 and has since hosted Ted Talks, worked extensively with Apple and Adobe, and regularly engages with her massive audience. Founded by James Grote, BrainFeverMedia is an app development company based in West Chester, Ohio that specializes in visual effects apps for iOS and Mac. For more information visit http://www.urban-jungle.app or http://www.brainfevermedia.com.