‘Urban Planning in Planet Earth’s Tragedy of the Commons,’ by Richard S. Bolan, explores changes needed to stem the tide of climate change 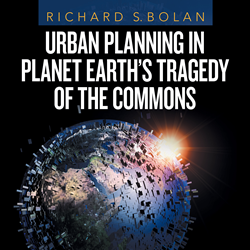 Economic, social, and political trends show growing poverty and inequality and increasing planetary ruin. [The Seventeen Sustainable Development Goals of the United Nations] seem to require us to change our current behavioral trends by 180 degrees.

Richard S. Bolan has published a comprehensive exploration of the immediate challenges faced by society due to climate change and its resulting environmental destruction.

In “Urban Planning in Planet Earth’s Tragedy of the Commons,” Bolan draws on his decades of experience in the urban planning field as a practitioner and educator to share with readers how the rapid growth of urban populations, the global dominance of corporatist-oligopolistic economies, and the rise of new technology have impeded progress to creating a more sustainable planet. These contemporary forces, Bolan says, require a new approach to the problems of urban growth and development.

“In many respects, the following chapters raise significant questions as to whether these goals are achievable,” Bolan wrote in the introduction to his book. “Economic, social, and political trends show growing poverty and inequality and increasing planetary ruin. [The Seventeen Sustainable Development Goals of the United Nations] seem to require us to change our current behavioral trends by 180 degrees.

“Thus, the book addresses this question: are we facing public-private partnership or public-private warfare or overall human decline? How can we train young people with education, foresight, and normative values to meaningfully tackle these challenges and provide better living for everyone in this radically changing world? How might we best learn of how we may overcome and stop the Tragedy of the Commons impacting planet Earth?”

Ultimately, “Urban Planning in Planet Earth’s Tragedy of the Commons” recommends a broad scope of improvements in education, both in the urban planning field and outside of it, to foster greater social responsibility, particularly among corporate and political leaders. The book provides an informed and well-researched perspective on how timely climate change and environmental problems can be addressed through critical economic, political, and social changes.

About the author
Richard S. Bolan has been an urban planner for more than 60 years. Bolan previously directed planning for the City of Boston before joining the faculty at Boston College in 1967. While there, he served as editor for the Journal of the American Institute of Planners. In 1985, he moved to the Humphrey School of Public Affairs at the University of Minnesota and remains a Professor Emeritus. His scholarly focus has been on planning theory and philosophy, and his most recent publications include “Urban Planning’s Philosophical Entanglements: The Rugged, Dialectical Path from Knowledge to Action”. Bolan earned degrees from Yale, MIT, and NYU. He currently resides in Minneapolis. To learn more, please visit http://www.bolanrs.com.