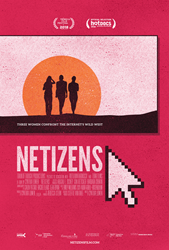 “As fierce as its protagonists, doggedly plowing through deeply painful subject matter and bristling with rightful fury.” -Teen Vogue

"A forceful rebuke to legions of victim-shamers who use ‘it's her fault’ as a mantra.” -Rolling Stone

“Lowen, who produced the disturbing 2011 doc BULLY, scores another infuriating triumph with her directorial debut, NETIZENS.” -The Village Voice

NETIZENS is directed by Cynthia Lowen, the producer/writer of the documentary BULLY, and catalyzed a national movement to stop bullying. Over 5 million students in America watched BULLY with their educators and used the free of cost materials created by Ms. Lowen and the Bully impact team. As a result, the film was effective in shifting bullying from being seen as a “normal” right of passage, to being something all schools and communities now know they must respond to.

The Wide Release: NETIZENS will be in wide release starting on October 22nd, 2019, and will be available for streaming rentals and purchases on Amazon, Apple TV, Google Play and Xbox. DVDs can be purchased from Amazon. It’s currently available for pre-order from Apple TV here: https://apple.co/2m2K84V

One in 25 Americans has been threatened with or faced a vicious form of digital harassment in which explicit images are shared online without the subject's consent, according to a report released by think tank Data & Society and the Center for Innovative Public Health Research.

The film’s website also offers a robust suite of tools, resources and discussion guides to equip audiences to protect themselves and prevent harassment. http://www.NetizensFilm.com

Cynthia Lowen’s Tips for Being Smart and Staying Safe Online:
1) Use strong passwords and password generator/keeper
2) Use multi-factor authentication
3) Manage your location data on apps
4) Manage the privacy settings on your social media accounts
5) Google yourself! (And remove your address if you find it posted on ‘people-finder’ sites

Anita Sarkeesian is a cultural critic who was targeted in the "Gamergate" attacks.From the film Netizens courtesy Train of Thought Productions

Tina Reine's career was derailed by an ex-boyfriend who created numerous reputation harming websites. S is trying to reclaim her identity.From the film Netizens courtesy Train of Thought Productions