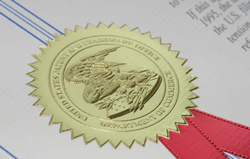 On March 10, 2020, the USPO issued Patent No. US 10,586,109 B1 titled Indoor Gunshot Detection With Video Analytics. This application incorporates the ability to accurately detect gunshots and to combine this ability with video analytics. During the Marjorie Stoneman Douglas High School shooting in Parkland, Florida on February 14, 2018, user error resulted in rewound video surveillance footage and a 30-minute delay before officers entered the building. The shooter killed 17 people in the incident, including 14 students and three staff members. The capability to automate video analytics from gunshot detections is an advancement that will alleviate life-threatening delays, help identify a shooter with facial recognition, and track a shooter’s movements throughout a building.

On April 21, 2020, the company was issued Patent No. US 10,627,292 B1 titled Indoor Gunshot Detection Analysis During Ongoing Fire Alarm. This application includes the ability and an approach to accurately detect a gunshot in the presence of loud acoustic backgrounds and strong infrared signals associated with audio and visual alarms. In the Parkland shooting, the smoke from the shooter’s AR-15 rifle set off the school’s fire alarms. While the Parkland school did not have a gunshot detection system installed at the time, this event underscores the importance of a gunshot detection systems’ ability to isolate and detect gunshots without producing false alerts during a visually and acoustically challenging event. The Guardian Indoor Active Shooter Detection System has been proven in independent customer tests to accurately detect shots and filter out false alerts in challenging environments such as airports, manufacturing plants, and sports stadiums and in the presence of fire alarms.

On May 19, 2020, Patent No. US 10,657,800 B1 titled Gunshot Detection Within An Indoor Environment was issued. This application includes the ability to deploy indoor gunshot detection devices without a requirement for calibration, environmental training or other processes that can be burdensome and prone to errors, such as false alerts or failing to detect shots. Gunshot detection systems that require calibration in different environments add layers of complexities and lower overall market confidence in system accuracy. This patented, calibration-free capability is built into both the Guardian PoE and wireless sensors and continues to be a critical feature exclusive to the Guardian System.

“Commercializing military technology for the indoor market has been an exciting challenge,” said Ronald Fowler, Chief Technology Officer for SDS, who authored the patents with Richard Onofrio, the company’s Vice President of Hardware Engineering. “It is extremely satisfying to see our inventions patented and to further validate our position as the technology leader in the gunshot detection market.”

About Shooter Detection Systems
With over fifteen years of experience in the development and delivery of gunshot detection systems to military and commercial customers, Shooter Detection Systems (SDS) is recognized as the security industry’s leading provider of gunshot detection solutions for schools, businesses, airports, critical infrastructure sites, U.S. Department of Defense bases, Federal Government Agencies and entertainment and manufacturing spaces, including over twenty-percent of Fortune 100 corporations who trust their indoor and outdoor solutions to accurately detect and rapidly report gunshots in their environments with zero false alerts. SDS owns three gunshot detection technology patents and has two patents pending with technology that is SAFETY Act Certified by the U.S. Department of Homeland Security, Approved for U.K. Government Use by the Centre for the Protection of Critical Infrastructure (CPNI), and SL4 Certified by the Australian Government’s Security Construction & Equipment Committee (SCEC), certifications exclusively held by their leading product, the Guardian Indoor Active Shooter Detection System. For more information, visit ShooterDetectionSystems.com, call 1-844-SHOT911, and follow on Twitter @shooterdetect.