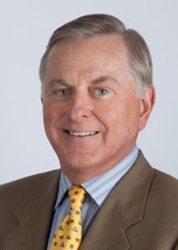 I am excited and thankful to be working alongside so many skilled professionals as we work together to advance our great specialty.

The American Association of Oral and Maxillofacial Surgeons (AAOMS) has named Dr. B.D. Tiner, DDS, MD, FACS, as its new president. He officially began his one-year term on Oct. 11. Dr. Tiner served as president-elect for AAOMS last year, serving as vice president the year prior to that. He has been an active member of the organization for 37 years.

“Dr. B.D. Tiner is a dedicated and effective leader, and he’s one of the finest oral surgeons the industry has ever seen,” said Richard Hall, USOSM president and CEO. “It is a tremendous honor and responsibility to be named president of AAOMS, which is the industry’s largest professional organization dedicated to surgeon education and patient safety. Dr. Tiner will lead this organization and its people well, and we are excited to acknowledge his achievement and congratulate him by sharing this news.”

A former U.S. Navy Captain, and currently an adjunct clinical professor in the Department of Oral and Maxillofacial Surgery at the University of Texas Health Science Center at San Antonio, Dr. Tiner has served as a mentor and teacher to countless OMS students and professionals. In addition, he has authored or co-authored numerous scientific publications and book chapters.

AAOMS is a nonprofit organization representing more than 9,000 oral and maxillofacial surgeons across the U.S. AAOMS strives to assure excellence in patient care by advancing, promoting and preserving the OMS specialty and the skill and professionalism of its members.

“I am honored and deeply humbled to serve as the 103rd President of the American Association of Oral and Maxillofacial Surgeons,” said Dr. Tiner. “I am excited and thankful to be working alongside so many skilled professionals as we work together to advance our great specialty.”