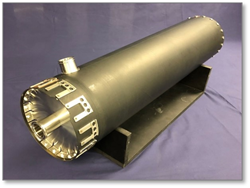 This paper discusses the history of fuel tank inerting on aircraft from the 1950s to today, including the development and benefits of Air Separation Modules (ASM) used in On-Board Inert Gas Generating Systems (OBIGGS) on both military and commercial aircraft.

“Valcor’s newest ASM design draws from over 75 million cumulative flight hours, providing a wealth of data,” stated Steve Etter, Vice President of Aftermarket Sales. “We raised the bar setting our own internal design and qualification requirements to provide operators with a significantly improved durability at a very competitive price.”

The full paper can be found here: