This paper discusses the MBSE techniques used today and the benefits of these advances. 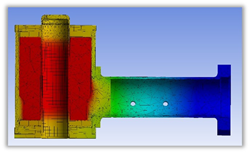 Design engineering technology has evolved substantially over the years. Today’s superior virtual digital technology takes the guesswork out of the equation, greatly reduces the design and development timeline, and minimizes related costs in the new product’s creation. Using digital iterative design not only speeds up the design process and controls costs but yields a substantially better valve in terms of performance and value. By the time a prototype is built, engineers have a good feeling that its performance meets spec or is pretty close. This paper discusses the techniques used today and the benefits of these advances.

“The utilization of Model-Based Systems Engineering (MBSE) provides Valcor with the necessary tools to rapidly develop new products,” stated Paul Meyers, Aerospace Sales & Marketing Director. “Our customers value this capability for both the speed of development and the robustness or our designs.”

The full paper can be found here:
https://www.valcor.com/designing-fluid-control-components-virtual-environment/