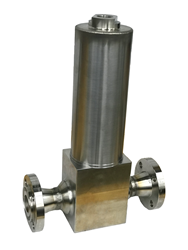 Valcor was tasked with designing a two-way, normally open solenoid valve that could handle hot, highly radioactive and chemically toxic fluids while sumberged in water. The valve also had to continuously function without maintenance for extended periods of time. This paper discusses the factors involved in making valves to such rigorous design and code requirements in order to qualify for use in such demanding applications.

The resulting valve design exceeded the requirements, and is used in many applications throughout the process system. Iterations of the final design could also work for applications in refrigeration, active pharmaceutical ingredient production for biotech and pharmaceutical manufacturing, as well as many others.

“Never before has a solenoid operated valve been conceived of handling so many technical challenges,” stated Steve Gatcomb, Nuclear & Power Sales & Marketing Director. “This is truly a unique design that will provide years of dependable service.”

The full paper can be found here:
https://www.valcor.com/valcor-releases-new-white-paper-solenoid-operated-valve-design/