“Legends of Caylan Kingdom of Gold” from Christian Faith Publishing author Valerie Howard is a notable and dynamic handbook showing the relativity of the people and concepts throughout the Bible. 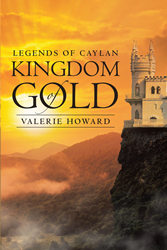 “Legends of Caylan Kingdom of Gold”: a riveting account that is designed to interpret notable passages in the book of Revelations into meaningful concepts that are good for self-application. “Legends of Caylan Kingdom of Gold” is the creation of published author Valerie Howard, a writer who earned her master’s degree in school counseling psychology from Regent University’s (Virginia Beach) prestigious online psychology program. She believes she was led by God to pursue psychology as a major, not to better others but to better herself and to help her connect with the world outside as deeply as she has connected with her world inside.

Howard writes, “Tragedy has befallen a young god, stripping him of his family and some of his memories, as he fell and was saddled with amnesia. But the lion king of all realms—Zemar—has chosen him as ruler of Rion, the kingdom of Gold! Even Zemar’s Father, Axel, approves! But there is a great danger.

“Axel’s estranged child and Zemar’s former brother—the Origin—wages war against him and seeks to overthrow the high crown and take over all of the realms, starting with the seven nations of Teleos. With this new king in his way—the nameless king now lives with a black target on his head.

“To overthrow Zemar, the Origin needs all seven keys to the Sacred Book, a terrible book of finality that is capable of ending the existence of all worlds. Zemar needs to protect the seven keys by delivering them to the rightful guardians predestined to carry them. But Zemar has chosen a boy—introverted, socially awkward, and above all, amnestic —to rule the kingdom and to seek out the seven guardians!

“Will the new king find all seven in time? Will the Origin succeed? Why is this nameless boy so special to Zemar? And if the Origin and Axel should ever meet on the battlefield, will Axel be able to fight his child?”

Published by Christian Faith Publishing, Howard’s new book shares a fascinating reading experience to the readers as it explains the hidden mystery of God.

This novel shifts the attention of the readers to the meaning of Revelations and uses the mystery to help explain it.

View a synopsis of “Legends of Caylan Kingdom of Gold” on YouTube.

Consumers can purchase “Legends of Caylan Kingdom of Gold” at traditional brick & mortar bookstores, or online at Amazon.com, Apple iTunes store, or Barnes and Noble.

For additional information or inquiries about “Legends of Caylan Kingdom of Gold,” contact the Christian Faith Publishing media department at 866-554-0919.