Commemorating his May 25th visit to the Church of the Nativity in Bethlehem, Fr. Peter Vasko, ofm, President of the Franciscan Foundation for the Holy Land presented Pope Francis with an honorary plaque enrolling him in the Memorial Hall of the same church. 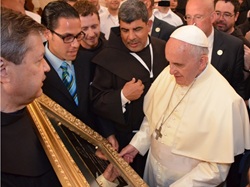 Christian Arabs here in the Holy Land were deeply moved by his pilgrimage.

Great joy surrounded the presentation of a memorial plaque given to Pope Francis during his pilgrimage to the Holy Land from May 24-26, 2014.

Presented by Fr. Peter Vasko, ofm, President of the Franciscan Foundation for the Holy Land, the plaque officially commemorated the pope's visit to the Holy Land, and specifically to the Church of the Nativity in Bethlehem.

The plaque, dated the day of his visit, May 25, also commemorated Pope Francis' enrollment in the Memorial Hall of that same church.

Pope Francis spoke of the need for peace in the Holy Land, according to Fr. Peter. "And not only with words." Pope Francis planted an olive tree symbolizing peace. It was the second tree planted on the Mount of Olives, according to the Vatican news site (news.va).

"The first [tree was planted] by Pope Paul VI half a century ago and the second by Pope Francis on May 26, 2014 during his three day visit to the Holy Land. The two trees now stand side by side," remarked Veronica Scarisbrick, reporting for Vatican Radio.

"We were very blessed to have him here," said Fr. Peter. "Wherever he goes he brings with him hope and joy. Christian Arabs here in the Holy Land were deeply moved by his pilgrimage. They have hope."