Vaughn College will celebrate its 89th Commencement on Saturday, May 15, 2021 at 1 p.m. Mr. Huntley A. Lawrence, acting chief operating officer and director of aviation of The Port Authority of New York and New Jersey (PANYNJ) will deliver the commencement address virtually to more than 200 graduates and their families. 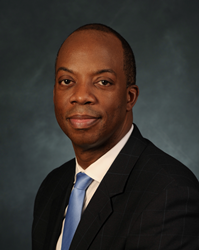 Mr. Huntley A. Lawrence, acting chief operating officer and director of aviation of The Port Authority of New York and New Jersey.

“We are thrilled to have Mr. Lawrence, a good friend and supporter of Vaughn College, delivering the address at this year’s commencement,” said Vaughn College President Dr. Sharon B. DeVivo.

Vaughn College will celebrate its 89th Commencement on Saturday, May 15, 2021 at 1 p.m. Mr. Huntley A. Lawrence, acting chief operating officer and director of aviation of The Port Authority of New York and New Jersey (PANYNJ) will deliver the commencement address virtually to more than 200 graduates and their families.

Mr. Lawrence, a 35-year veteran of PANYNJ, was named acting chief operating officer (COO) in January 2021 and director of aviation in January 2017. As Acting COO, he is responsible for working with the Port Authority’s five lines of business—Aviation, Port, PATH, Tunnels, Bridges and Terminals, and the World Trade Center—as well as the operations services department. As director of aviation, he is responsible for managing one of the world’s largest airport systems—John F. Kennedy (JFK) International, Newark Liberty International, LaGuardia, New York Stewart International and Teterboro airports—with revenues of $2.5 billion and a staff of more than 1,500 aviation professionals. Prior to becoming director, Mr. Lawrence served as deputy director of aviation, a role he had held since May 2014.

He moved with his family from London to Queens in 1969, where he lived a stone’s throw from LaGuardia Airport (LGA)—and attended the aviation program offered at P.S. 127 where he learned firsthand about flight at LGA and JFK. During Mr. Lawrence’s time at August Martin High School he attended core science classes that focused on the different types of weather a pilot may face and how it affects travel. Shortly before graduating high school, Mr. Lawrence had passed his written pilot’s test.

“We are thrilled to have Mr. Lawrence, a good friend and supporter of Vaughn College, delivering the address at this year’s commencement,” said Vaughn College President Dr. Sharon B. DeVivo. “His lifelong interest and dedication to aviation and his Queens roots will resonate with many of our students. He is the perfect role model for graduates to emulate—starting as an intern in a field he loved at The Port, and working his way through the ranks to run one of the largest transportation systems in the country.”

During his tenure as director, Mr. Lawrence has successfully led the airport system through a once-in-a-generation transformation, including unprecedented investment in airport facilities, 21st century customer experience, and the implementation of a more effective governance structure. Major components of a new LGA opened, and significant progress continues on a new terminal at Newark Liberty while planning advances on the future redevelopment of JFK. He has consistently been a strategic visionary with the ability to unify staff towards a common vision, establishing a well-deserved reputation as a leader of the highest caliber. Most recently, Mr. Lawrence led the implementation of best-in-class COVID-19 safety protocols at the airports as part of a vision to deliver world-class service at world-class airports.

“I’m excited to speak to this class of graduates, whose hard work during a difficult time is especially impressive,” Mr. Lawrence said. “From our initial response to the ongoing recovery, the aviation industry has seen an increase in the need for highly skilled professionals. These graduates are entering the workforce at a pivotal and exciting moment and we stand ready to welcome them.”

Mr. Lawrence holds a Bachelor of Science degree from Florida Institute of Technology and a Master’s of Business Administration from Dowling College. He is vice chairman of the American Association of Airport Executives’ (AAAE) Airport Legislative Alliance, chair of the International Facilitation Sub-committee, and a member of AAAE’s Policy Review Committee and the Federal Aviation Administration’s Management Advisory Council. He is a member of the board at Airports Council International-North America, the Wings Club Foundation, NYC & Co. and USO Metropolitan of New York, and a member of the NextGen Advisory Committee. Mr. Lawrence is also a licensed pilot.

VAUGHN COLLEGE: Founded in 1932, Vaughn College is a private, nonprofit, four-year college that enrolls more than 1,500 students in master’s, bachelor’s and associate degree programs in engineering, technology, management and aviation on its main campus in New York City and online. The student-faculty ratio of 14 to 1 ensures a highly personalized learning environment. Ninety-nine percent of Vaughn College graduates are placed in professional positions, 89 percent in their field of study, or choose to continue their education within one year of graduation. The institution serves many first-generation college students and is recognized by the US Department of Education as a Hispanic-Serving Institution. Vaughn was ranked no. 1 in upward mobility nationwide in a study conducted by The Equality of Opportunity Project.