V.C.Thomas’ takes an in-depth look at who is mainly responsible for terrorism, death and destruction around the world today. 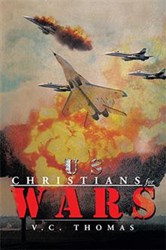 “US-Christians-for-Wars” by author V.C. Thomas is a compilation of articles found on the internet (with an introduction by Thomas) which looks at who is mainly responsible for terrorism, death, destruction and genocide around the world today. Thomas investigation into American, Zionist, Right Wing, Evangelical, Fundamentalist brand of Christianity began in 2009. He says the US is responsible for invading, attacking with modern weapons of mass destruction (WMD), and bombing Korea (4 years), Viet Nam (10 years), Iraq (10 years) and Afghanistan (10 years – on-going). The objectives include maintaining the nearly trillion dollars per year US weapons & war industry and to expand Israel by eradicating Palestinians from their ancestral homeland.

According to Thomas, the region now called Israel was always Palestine even during the time of Christ. Israel was created recently by Jewish invaders of Eastern European origin, with no genetic or ancestral connection to Palestine in 1948 because of the Holocaust in Europe. Attacks on Israel consist of Palestinians youths throwing stones and home-made bombs compared to the deaths and devastation caused by US and Israeli bombing of Muslim countries.

After he retired in 2008, V.C Thomas started investigating God and Religion which lead to his first book “The God Dilemma – To-Believe OR Not-To-Believe” published by Xlibris in 2009. For more information on this book, log on to http://www.thegoddilemma.com/. He began examining Christianity (his family upbringing) in 2010 which led to his interest in Palestine, Israel and the Middle East by watching news programs and political discussions on “Regular TV”. This in turn led to watching “Right-Wing-Christian TV” and their preachers. He realized that he was only hearing the pro-Israeli side of the story from the US media and that the “Evangelical Christian-Right” is one of the main supporters and instigators of US wars and crimes in the Middle East today. The Christian Right claims that US wars for Israel are justified by the Old Testament Bible and Revelations in the New Testament. “US-Christians-for-Wars” unravel to readers the other side of story. For more information on this book, log on to http://www.us-christians-for-wars.net/.

On September 11 , 2001, 19 independent young Muslim men from Egypt & Saudi Arabia (US allies) crashed two commercial airliners into the twin 110-storey towers of the World Trade Center in New York city which killed about 3,000 people. http://www.cnn.com/2013/07/27/us/september-11-anniversary-fast-facts/. US retaliation has been to invade, attack & bomb Iraq & Afghanistan for over 10 years, resulting in over 250,000 civilian deaths. http://mondoweiss.net/2013/04/democracy-afghanistan-pakistan.html. Sanctions have caused a million civilian deaths. http://www.thenation.com/article/hard-look-iraq-sanctions
.
For more information on this book, interested parties may log on to http://www.Xlibris.com.

About the Author
V.C. Thomas (VCT) was born in India in 1940. His family belonged to the Jacobite Syrian Orthodox Church which was, by tradition, founded by the Apostle St. Thomas on the Southwest Coast of India (Kerala State). He attended a British run Protestant school in India where each day began with a short Anglican service and he had to study the New Testament Bible. He has a Mathematics degree (included 2 religion courses) from a Catholic Jesuit College in India and Post-Graduate & Doctorate degrees in engineering from the United Kingdom. From 1969, until he retired in 2008, he worked in the USA as a scientific programmer, professional engineer and university professor. He was not involved with religion after he moved to the UK in 1961.His investigation into American, Zionist, Right Wing, Evangelical, Fundamentalist brand of Christianity began in 2009.