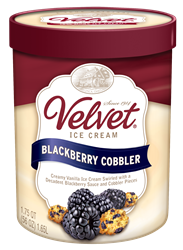 “After more than a century of serving ice cream lovers, it’s still exciting every time we introduce new flavors and tastes to our customers,” President Luconda Dager.

Velvet Ice Cream, a fourth-generation ice cream maker in Utica, Ohio, and mid-west distributor of premium craft ice cream and novelties has introduced a variety of new flavors across their product lines, sure to please fans this season. The new flavors celebrate the tastes of spring and summer with fruit-forward options along with a nod to classic summer fruits and desserts.

“After more than a century of serving ice cream lovers, it’s still exciting every time we introduce new flavors and tastes to our customers,” Velvet Ice Cream President Luconda Dager said. “People look forward to the new offerings each season and our product development team really knocked it out of the park this year.”

Velvet always has something for everyone – the 56 oz premium ice cream which is available in 30 signature rich flavors, is now available in:

Velvet Ice Cream Sandwiches not only have two new flavors but also have a brand-new package design. New flavors include:

The new flavors will be available at grocery and convenient stores throughout the Velvet distribution areas as well as more than three dozen dipping parlors including Velvet’s Ye Olde Mill in Utica, to open at a to-be-determined date when the state’s shelter-in-place order has lifted.

About Velvet Ice Cream
Founded in 1914 by Joseph Dager, Velvet Ice Cream is a fourth-generation family ice cream maker based in Utica, Ohio. The company’s premium craft ice cream, known for its signature velvety texture, is sold throughout central Ohio and across the region (OH, KY, WV, MI, IN). Velvet produces more than 5 million gallons of ice cream every year from its headquarters on the grounds of Ye Olde Mill. The 25-acre property houses an ice cream museum, restaurant, playground, picnic area and catch-and-release fishing pond. It welcomes 150,000 visitors per year and was named by Frommer's as one of America’s 10 Best Ice Cream Factory Tours. Velvet maintains a long tradition of supporting local communities and organizations including Pelotonia, the Utica Sertoma, Adopt-A-Highway and the Licking County Humane Society.