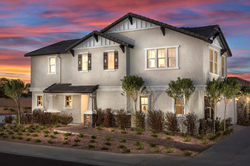 Over the past few months, we’ve seen an astounding uptick in demand in Sonoran Ridge Estates for the remaining 12 lots that had not previously sold

Vermaland, a leading Phoenix-based land banking and development company, announced today that the company has sold $1 million in residential lots in the past few months in Sonoran Ridge Estates, a high-end custom home, gated community situated against the White Tank Mountains.

Sonoran Ridge Estates was originally concepted in 1995, when Kuldip Verma, CEO and founder of Vermaland purchased 320 acres at the foot of the White Tank Mountains for $112,000 down and a seller carry back.

“My family and friends thought I was crazy, there was literally nothing out there,” said Verma. “But, I had a vision and I’m so glad I didn’t listen to those who didn’t see my vision.”

He developed the community a decade later in 2004 and with its breathtaking views of the White Tank Mountains among one-acre lots, the community sold out quickly. When the market crashed in 2007, it quieted down and stayed slow for the better part of the last decade until 2017 when demand started picking up again. Today, Sonoran Ridge Estates features gorgeous, multi-million dollar homes and is truly a hidden gem in the area.

“Over the past few months, we’ve seen an astounding uptick in demand in Sonoran Ridge Estates for the remaining 12 lots that had not previously sold,” said Verma. “So far, we’ve sold eight of those remaining lots and the buyers are moving fast, seeing the property and closing in a few days. In many cases, we are doing two-week escrows and cash deals. The demand is high to say the least.”

Verma says he plans to hold the remaining four lots. Last year, Vermaland developed the remaining 110-acre parcel adjacent to Sonoran Ridge Estates into a 246 single-family home subdivision called White Tank Vistas, which he sold to a developer for $3 million in 2019.

Vermaland has been in the land business as a wholesale buyer and seller for 20 years, starting the company in 2001. Vermaland owns thousands of acres of land in Buckeye/Tonopah, adjacent to property owned by Bill Gates, and other properties around Metro Phoenix including Harquahala Valley, Gila Bend, and Hyder which have all been a huge source of solar power for thousands with many properties containing solar farms containing hundreds of acres of solar panels.

ABOUT VERMALAND
Vermaland is a leading land banking and land development company in Phoenix, founded by Kuldip Verma, P.E. in 2001. The firm owns thousands of acres of land, mostly in Buckeye, Tonopah, Harquahala Valley, Gila Bend, Hyder, and others. Currently, Vermaland has the largest holdings of 50 - 1,200 acre parcels in Metro Phoenix and offers land for residential, commercial, agricultural, solar and other renewable projects. Please visit http://www.vermaland.com.