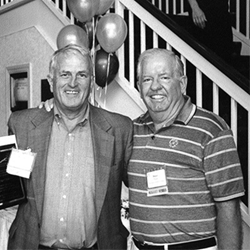 "...by all accounts, George Chaffee was a tireless public servant and Vermonters will continue to benefit from his contributions to our state for decades to come." said Governor Phil Scott

The Agency of Commerce and Community Development (ACCD) and the Department of Financial Regulation (DFR) today recognized George Chaffee after his passing on February 6, 2021. George became Deputy Commissioner of the then Banking and Insurance Department in 1977 and was appointed by Governor Richard Snelling as Commissioner of the department on March 21, 1980. While Commissioner, George introduced landmark legislation in 1981 that allowed for the creation of the captive insurance industry in Vermont by making the state a domicile option for companies around the world.

“While I didn’t have the privilege of knowing him personally, by all accounts, George Chaffee was a tireless public servant and Vermonters will continue to benefit from his contributions to our state for decades to come. I join ACCD, DFR and many Vermonters honoring his service and memory.” said Governor Phil Scott.

Since the passing of the captive insurance legislation 40 years ago, Vermont has become a prominent leader in the industry, ranked first nationally and third globally with over 1200 licensed captive insurance companies to date. The captive industry has directly created approximately 400 jobs in Vermont and contributed about $96 million to the State’s Gross Domestic Product.

“Vermont is considered by the captive industry to be the ‘Gold Standard’ due to the expert regulatory staff, the vast infrastructure of service providers in Vermont, and the strong support of the legislature, all of which can be attributed to the work and vision of George Chaffee,” said Deputy Commissioner of Captive Insurance, David Provost.

George Chaffee’s dedication to the captive industry went beyond his time in public service. George was also the former president and founding board member of the Vermont Insurance Institute at Champlain College, established to train accountants to work in the specialized field of insurance accounting. It is now known as the International Center for Captive Insurance Education at the University of Vermont and is the first educational initiative in the nation designed for captive insurance professionals. Additionally, George was the founding director of the Vermont Captive Insurance Association, today the world’s largest captive insurance association with 426 members.

Jeff Johnson, former Commissioner of Banking, Insurance and Securities, today working in the captive industry as a lawyer and shareholder at Primmer Piper Eggleston & Cramer PC, worked with George often throughout his career. He said when reflecting on the formation of the industry, “George was dedicated to recruiting companies to Vermont to form a captive. He would take the time to show them around Montpelier and introduce them to the Governor. Prospective companies were impressed beyond words at the time and attention given to them. It set a tone that has distinguished Vermont apart from other domiciles from the very beginning.”

George’s family has asked that donations be made in his name to the Rokeby Museum in Ferrisburgh, Vermont.