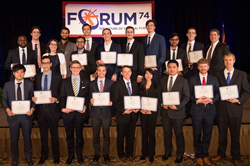 Through the incredible generosity of our members, we have been able to greatly expand the program in recent years. Over the past decade, we have now awarded 238 scholarships worth more than $750,000.

The Vertical Flight Society is pleased to announce its 2021 Vertical Flight Foundation (VFF) scholarship recipients. Scholarships totaling $100,000 are being awarded this year to 27 of the world’s most talented engineering students interested in vertical flight.

“Since 1977, our Vertical Flight Foundation Scholarships have helped inspire generations of students to pursue careers in vertical flight, with many now holding leadership positions in industry, academia and government, with more 600 scholarships awarded to date,” said VFS Executive Director Mike Hirschberg. Through the incredible generosity of our members, we have been able to greatly expand the program in recent years. Over the past decade, we have now awarded 238 scholarships worth more than $750,000.”

The following are this year’s awardees, who will be recognized at the VFS Grand Awards Ceremony which will debut on Wednesday, May 5, 2021. The award ceremony video will be one of the highlights of the Vertical Flight Society’s 77th Annual Forum & Technology Display, taking place virtually from May 10-14, 2021 (see http://www.vtol.org/forum).

Each of the Bachelor scholarships includes a cash award of $3500; the Masters students receive $3500 each and Doctorate scholarship winners each receive $3,625. In addition, the top candidates (marked above with an asterisk) have received special recognition. Damaris Rene Zachos, Pennsylvania State University, will receive a total of $5,000 for the Bell Scholarship, provided by a generous VFF endowment from the company and awarded to the top overall scoring VFF recipient. Paola Zanella, Georgia Institute of Technology, is receiving $6,000 as the winner of the Dr. Jing Yen VFF Scholarship for Cost Awareness, given to the most qualified applicant who shows interest in improving the affordability of rotorcraft.

VFF and VFS are both recognized by the US Internal Revenue Service as 501(c)(3) charities. VFS covers all overhead costs of administration and accounting, so 100% of every tax-deductible contribution to VFF goes directly to student scholarships.

Founded as the American Helicopter Society in 1943, the Vertical Flight Society is the global non-profit society for engineers, scientists and others working on vertical flight technology. For over 75 years, the Society has led technical, safety, advocacy and other important initiatives, and has been the primary forum for interchange of information on vertical flight technology.