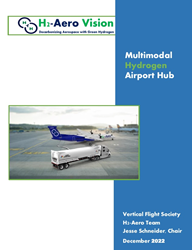 The whitepaper gives the first complete overview of hydrogen storage per transportation type and status of standards to assist entities to appropriately size H2-Hub in stages.

The Vertical Flight Society (VFS), the world’s leading non-profit organization working to advance vertical flight, has published a groundbreaking whitepaper for multimodal hydrogen airport. The goal of the VFS H2-Aero whitepaper, “Multimodal Hydrogen Airport Hub,” is to propose a repeatable hydrogen hub for the airport, first with a ground vehicle fueling station, and later expanding to an airport-based hub supplying multiple modes of transportation.

Aircraft emissions equate to approximately 10% of US transportation greenhouse gas emissions and 3% of overall. By 2050, it is expected that commercial aircraft emissions could increase to over 22% of the world’s total CO2 emissions. Since the average aircraft life is 30 years, it hastens the need to replace fossil fuels and their powertrains as soon as possible. To abate this impending reality, the VFS H2-Aero Team’s mission is to help decarbonize aviation using zero-emission propulsion (e.g., fuel cells) fueled by carbon-free hydrogen.

Though sustainable aviation fuels (SAF) are starting to be established as a “drop in fuel” for replacing conventional kerosene, there are many factors indicating that hydrogen will be needed to achieve net zero carbon emissions in aviation. The H2-Aero Team was formed in 2022 with the goal to decarbonize aviation with carbon-free hydrogen, as a follow-on to SAF.

“Though SAF has taken the forefront as the primary means to reduce aircraft carbon emissions, hydrogen offers numerous benefits, such as 5x less water usage and 3x less cost at scale (less than kerosene), while greatly accelerating the transition to replace fossil fuels. To stimulate the transition to hydrogen in aviation, it is advantageous to create a multimodal ecosystem at the airport. The H2-Aero whitepaper proposes using a ground vehicle station as an ‘anchor’ or starting point that would later grow into a Hydrogen Hub to serve the entire airport,” stated Jesse Schneider, the H2-Aero Team’s Chair, and CEO of ZEV Station. “The whitepaper gives the first complete overview of hydrogen storage per transportation type and status of standards to assist entities to appropriately size H2-Hub in stages. The H2-Aero lays the framework also for hydrogen airport demonstrations in the form of a public-private partnership to help validate the fueling and aircraft technology.”

“VFS recognized in January 2022 the need to create a whitepaper for hydrogen at the airport as fuel cells are nearing the point of viability for aircraft. So, we formed the H2-Aero Team to address commercialization needs,” said Mike Hirschberg, VFS Executive Director. “We’re thrilled to publish this whitepaper from the H2-Aero Team that could help accelerate the transition to hydrogen in aviation.”

The H2-Aero “Multimodal Hydrogen Airport Hub” whitepaper can be found at http://www.vtol.org/hydrogen, where VFS has summarized some of the work the Society has supported over the past few years. VFS held the first conference on hydrogen aviation in North America in March 2022.

The 2nd Annual H2-Aero Symposium will be being held March 28-30, 2023, in Long Beach, California. Details can be found at http://www.vtol.org/h2symposium. Like the first meeting, the 2023 symposium will feature two days of groundbreaking presentations with the latest cutting-edge developments by a who's who of the hydrogen aviation and fuel cell community. Presentations on fuel cell aircraft technology, demonstrations and hydrogen hubs for airports will be held on March 28-29. In addition, there will be an afternoon meeting on March 29 to kick off the new SAE International AE-5CH Hydrogen Airport Taskgroup. As a plus, there will be a tour port of Long Beach to view the heavy duty hydrogen fueling facilities on Thursday morning, March 30.

VFS was founded as the American Helicopter Society in 1943 by the visionaries of the early helicopter industry, who believed that technological cooperation and collaboration were essential to support this new type of aircraft. Today, history is repeating itself, with VFS playing a similar role helping to advance today’s revolutionary electric flight aircraft.