Kicking off this September, Travis Manion Foundation (TMF) will host their 13th Annual 9/11 Heroes Run 5K Race Series. Typically held in more than 90 locations across the country and around the world, this year’s race series will have a bigger focus on the opportunity for runners to participate virtually. 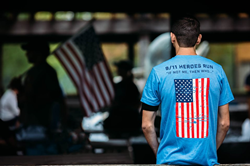 Typically held in 90+ locations around the world, this year’s 9/11 Heroes Run 5K Race Series will have a bigger focus on the opportunity for runners to participate virtually.

The sense of unity displayed in the days following 9/11 and during our current crisis exemplifies the strength of our national character and inspires us to honor the legacies of those lost, as well as those who still lead the charge.

The 9/11 Heroes Run 5K Race Series is dedicated to uniting communities to remember the nearly 3,000 lives lost on 9/11, as well as to honor our veterans, military, and first responders who dedicate their lives to serving others.

To ensure the safety and well-being of all participants, volunteers, Spartans, and the members of the community are the top priority, TMF has been working closely with local and state officials to still host physical races with designated safety protocol in place. In communities where this will not be possible, TMF is encouraging participants to sign up as a virtual runner. The virtual runner option allows participants to choose their own date, time, and location where they can run, walk, or ruck the 5K at their own pace.

The 9/11 Heroes Run 5K series was inspired by Marine 1st Lt. Travis Manion, who was killed by an enemy sniper in Iraq in April 2007 as he selflessly pulled his wounded teammates to safety. Before his final deployment, Travis visited Rescue One in NYC—famous for losing almost all of their men on 9/11—and returned home with a deeper passion about why he was fighting in Iraq. At its heart, the 9/11 Heroes Run is a tribute to a personal commitment to never forget the heroes of that day. The 9/11 Heroes Run will also acknowledgment to the hard work of all of our nation’s frontline healthcare workers, who especially this year, have continued to serve selflessly and valiantly during a time of uncertainty against an invisible enemy.

For the 2020 race series, Travis Manion Foundation has again partnered with GORUCK for a ruck division of 9/11 Heroes Run. Rucking is moving with weight on your back and is the foundation of Special Forces training. It combines strength and cardio, is adaptable to anyone’s goals based on the amount of weight carried, and is a popular, empowering activity for those who hate to run or find it boring. As part of the marketing campaign for 9/11 Heroes Run series, TMF has released a video to inspire runners and walkers of all ages to participate, which can be seen here.

“While in most communities we may not be able to stand side by side this September, now more than ever I challenge all Americans to join our Spartans as we honor those who stepped up when our country needed them the most following the events of 9/11. We'll also run to honor our frontline workers, who exemplify that same bravery everyday as they risk their lives battling an invisible enemy,” said TMF President Ryan Manion. “The sense of unity displayed in the days following 9/11 and during our current crisis exemplifies the strength of our national character, and inspires us to honor the legacies of those lost, as well as those who still lead the charge.”

Travis Manion Foundation’s 9/11 Heroes Run is proud to have Comcast NBCUniversal as a national sponsor. For more information about the race series or to register, visit http://www.911heroesrun.org

About Travis Manion Foundation:
Travis Manion Foundation (TMF) unites communities to strengthen America's national character by empowering veterans and families of fallen heroes to develop and lead future generations. In 2007, 1st Lt. Travis Manion (USMC) was killed in Iraq while saving his wounded teammates. Today, Travis' legacy lives on in the words he spoke before leaving for his final deployment, "If Not Me, Then Who..." Guided by this mantra, veterans continue their service, develop strong relationships with their communities, and thrive in their post-military lives by serving as character role models to youth. As a result, communities prosper and the character of our nation’s heroes lives on in the next generation.

The 9/11 Heroes Run virtual runner option allows participants to choose their own date, time, and location where they can run, walk, or ruck the 5K at their own pace.