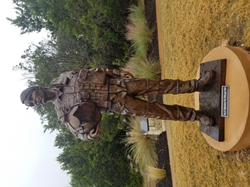 “Sculpting remains my primary passion, and having created monuments both large and small for communities all over the country – as well as for several municipalities and private organizations – I was honored to have created beautiful pieces for the Cedar Park Veterans Memorial."

Big Statues, a Provo, Utah-based business headed by artist Matt Glenn who has been sculpting bronze monuments for over 15 years, has crafted Veterans Day tribute statues to be displayed in Cedar Park, Texas, the impeccably detailed pieces depicting Vietnam Era Soldiers and an Iraq War/Afghanistan War Helicopter Pilot to grace the Austin suburb while bringing unparalleled beauty and a keen sense of history to the Cedar Park Veterans Memorial.

Cedar Park officials unveiled the statues, November 9, just prior to Veterans Day, at the Veterans Memorial, a lush and historically rich area honoring all veterans – past, present and future. These latest pieces will join three sculptures previously crafted by Glenn and Big Statues for the Memorial, including a life-sized bronze sculpture depicting a World War I “doughboy,” a World War II U.S. naval commander, and a Korean War Marine.

The sculptures, along with the latest from Big Statues in the form of the Iraq War/Afghanistan War Helicopter pilot and Vietnam soldiers, are part of a project headed by the Cedar Park City Council and the Parks, Arts and Community Enrichment (PACE) Advisory Board. PACE’s purpose is to assist with the development and promotion of a comprehensive cultural and recreational enrichment program for the city, with the PACE Board helping enhance the quality of life in Cedar Park for residents while creating a unique and positive experience for visitors.

“Sculpting remains my primary passion, and having created monuments both large and small for communities all over the country – as well as for several municipalities and private organizations – I was honored to have created beautiful pieces for the Cedar Park Veterans Memorial,” explains Glenn. “This is an area that simply oozes with a sense of history and respect for the men and women who have laid down their lives for all of us, making the addition of the helicopter pilot and Vietnam soldier very fitting.”

The first research and planning step as executed by Glenn and his staff involved creating sketches and scale miniatures of the two statues using photographs, a process which preceded the construction of a steel frame – known as an armature – to which a foam core is affixed. Following a process of sealing the foam core with latex, Glenn began applying hundreds of pounds of hot clay to the frame, after which his artists spent countless hours molding and sculpting every tiny detail of both the helicopter pilot and Vietnam vet to produce a museum-quality work of art.

Once the clay sculpture was finished, the Big Statues team began the process of creating molds of the statues before moving on to covering the clay in layers of polyurethane, ultimately capturing every minute detail. Plaster was then applied to the exterior of the mold as a ridged “jacket” to help the mold hold its shape, and once dry, the clay was removed.

From that point onward, it was a matter of creating a positive wax replica of the original clay sculpture, making a ceramic shell by dipping it into a mixture known as “slurry,” heating solid blocks of bronze to temperatures nearing 2250-degrees so that the liquid bronze could be poured into the ceramic molds and finally welding, assembling and refining the pieces.

Big Statues is located at 815 West Columbia Lane in Provo and can be reached by calling (801) 358-9739. For more information visit http://www.BigStatues.com or email info@BigStatues.com.