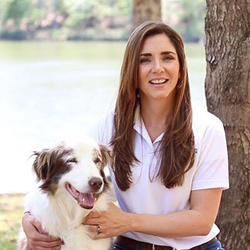 Within four weeks, it was like the clock had turned back years. He was so excited to go out and play.

Dr. Julie Reck of Veterinary Medical Center of Fort Mill has recently begun providing VetStem Regenerative Cell Therapy to her patients. Her first stem cell patient, her own geriatric Australian Shepherd, Simon, was treated in June 2019 for osteoarthritis in his shoulders, hips, and knees. According to Dr. Reck, Simon wanted to play but his body was weak, and he struggled to play fetch and other games with his family. He was already on pain medications and other joint supplements so Dr. Reck researched alternative options to ease Simon’s discomfort.

Dr. Reck completed VetStem’s online credentialing course in early June 2019 and less than three weeks later, she performed her first stem cell process on Simon. In a minimally invasive anesthetic procedure, Dr. Reck collected fat from Simon’s abdomen and shipped it to the VetStem laboratory in Poway, California. Once received, the fat was aseptically processed to extract and concentrate Simon’s stem and regenerative cells. Injectable doses of Simon’s own stem cells were created and shipped back to Dr. Reck. Approximately 48 hours after the initial fat collection, Simon received six joint injections: one into each shoulder, knee, and hip.

According to Dr. Reck, Simon showed signs of improvement just a few weeks following the procedure. In a before and after video she shared, you can see Simon running, jumping, spinning, and playing better than he was prior to receiving VetStem Cell Therapy. It was apparent that Simon was in less pain and was regaining muscle and confidence. Dr. Reck stated, “Within four weeks, it was like the clock had turned back years. He was so excited to go out and play.”

Dr. Reck is among the nearly 2,300 veterinarians who have provided VetStem Cell Therapy services to their patients across the United States and Canada. VetStem Regenerative Cell Therapy utilizes the patient’s natural healing cells to treat degenerative diseases such as osteoarthritis as well as traumatic injuries such as torn ligaments and injured tendons in dogs, cats, and horses. Stem cells are regenerative cells that can differentiate into many tissue types. They have been shown to reduce pain and inflammation, help to restore range of motion, and stimulate regeneration of tendon, ligament and joint tissues.

About Julie Reck, DVM
Dr. Reck received her DVM from Virginia Maryland Regional College of Veterinary Medicine in 2007. She developed a strong interest in surgery and has performed thousands of soft tissue and orthopedic procedures. In 2010, Dr. Reck published Facing Farewell to help pet parents through the process of end of life decisions for their pet. The book was awarded the Maxwell Medallion for the best book in pet healthcare at the 2010 Westminster Dog Show. In 2011, Dr. Reck founded the Veterinary Medical Center of Fort Mill and it quickly grew into a flourishing 5 doctor practice just south of Charlotte, NC. Dr. Reck lectures throughout the year at the world’s largest veterinary conferences on practice ownership, Fear Free, and leadership. In 2018, Dr. Reck co-founded Aspire to provide online leadership training for the veterinary profession.

About VetStem Biopharma, Inc.
VetStem Biopharma was formed in 2002 to advance regenerative medicine. This privately held biopharmaceutical enterprise, based near San Diego (California), currently offers veterinarians an autologous stem cell processing service (from patients’ own fat tissue) among other regenerative modalities. With a unique expertise acquired over the past 15 years and 17,000 patients treated by veterinarians for joint, tendon or ligament issues, VetStem has made regenerative medicine applications a therapeutic reality beyond the realm of research. The Company’s stated mission being “to extend and enhance the lives of animals by improving the quality of recovery in acute conditions, but also by unlocking ways to slow, stop and ultimately revert the course of chronic diseases”. In addition to its’ own portfolio of patents, VetStem holds exclusive global licenses to a portfolio of issued patents in the field of regenerative medicine.