Dr. Sara Walker of Mixed Pet Veterinary Hospital has been successfully using the Pall Veterinary Platelet Enhancement Therapy System (V-PET™) since April 2018. Bella and Harlee are among her patients who have experienced great results after treatment with V-PET™. 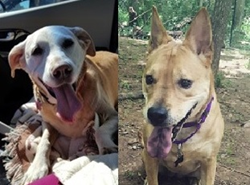 Dr. Walker’s first patient was a Labrador mix named Bella. At nearly thirteen years old, Bella was riddled with arthritis in her hips, elbows, and knees. Though she was on several pain medications and anti-inflammatories, her condition became so severe that the medications were no longer controlling her pain. In April 2018, Bella was treated with V-PET™ and within a few weeks her mom, Joan, noticed improvement in her mobility. She was able to quickly go up the stairs without assistance and jump on the couch for the first time in years. Dr. Walker noted her pain was significantly decreased and she had improved range of motion in her arthritic limbs. Before and after videos of Bella going up the stairs can be viewed here.

One week after treating Bella, Dr. Walker treated Harlee, a six-year-old mixed breed. Harlee tore her cruciate ligament in her left knee in May 2017. Shortly after the injury, Harlee underwent surgery to repair the ligament. Though the surgery was successful, Harlee continued to favor the leg and eventually stopped using it altogether. In addition to the scar tissue that had likely formed in her knee, Dr. Walker believed that Harlee tore her meniscus and suggested treatment with the Pall V-PET™. A few weeks after treatment, Harlee’s dad, Jon, noted that she was using the leg more and did not seem to be in pain. She was able to run and go on longer walks without being sore afterwards. Jon stated that she is back to the dog she was before she tore her cruciate ligament. Dr. Walker noted that she was playing more, and her overall quality of life had significantly improved.

The Pall V-PET™ kit is distributed by VetStem Biopharma to veterinarians in the United States and Canada. The kit functions by running a sample of blood collected from the patient through a specialized filter that selectively captures the platelets. The concentrate is then injected directly into the site of injury or damaged tissue. The platelets are activated by exposure to the damaged tissue, which triggers them to release growth factors that stimulate tissue repair. Since the animal is both the donor and recipient, there is very little risk of rejection. V-PET™ can also be used in conjunction with VetStem Regenerative Cell Therapy to further aid healing. Dr. Walker has been credentialed to perform VetStem Regenerative Cell Therapy since March 2018.

About Dr. Sara Walker, DVM, PhD
Dr. Sara Walker was raised in Charlotte, NC. She received her BS in Zoology and her MS in Animal Breeding and Genetics from North Carolina State University. She went on to receive her PhD in Molecular and Cellular Pathobiology from Wake Forest University followed by her DVM from the Virginia-Maryland Reginal College of Veterinary Medicine. She is currently working in general practice at Mixed Pet Veterinary Hospital in Charlotte, NC. Her veterinary interests include dentistry, lameness, and dermatology.

About VetStem Biopharma, Inc.
VetStem Biopharma is a veterinarian-lead Company that was formed in 2002 to bring regenerative medicine to the profession. This privately held biopharmaceutical enterprise, based near San Diego, California, currently offers veterinarians an autologous stem cell processing service (from patients’ own fat tissue) among other regenerative modalities. With a unique expertise acquired over the past 16 years and 14,000 patients treated by veterinarians for joint, tendon or ligament issues, VetStem has made regenerative medicine applications a therapeutic reality. The VetStem team is focused on developing new clinically practical and affordable veterinary solutions that leverage the natural restorative abilities present in all living creatures. In addition to its own portfolio of patents, VetStem holds exclusive global veterinary licenses to a portfolio of over 70 issued patents in the field of regenerative medicine.