VetStem Biopharma is Pleased to Share the Success Story of Jack, a Great Pyrenees who was Treated with Stem Cell Therapy by Dr. Andrea Hayes

Jack, a Great Pyrenees, was successfully treated with VetStem Regenerative Cell Therapy for osteoarthritis in his hips and later his left elbow by Dr. Andrea Hayes of Boone Animal Hospital. 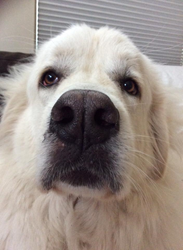 ...Rebecca believes he would not have survived much longer had he not received stem cell therapy.

Like many large breed dogs, Jack, a Great Pyrenees, began showing symptoms of joint disease very early on. Before he was a year old, his mom, Rebecca, noticed he was slow to get up and knew something was not quite right. She had him examined by her veterinarian and her suspicions were confirmed: Jack had bilateral hip dysplasia, a congenital condition affecting the formation of the hip joints. Left untreated, hip dysplasia will result in arthritis and pain in the joint. Rebecca realized the severity of the situation when, upon entering a pet store, Jack’s legs splayed out on the white, slippery floor and he yelped. She knew something had to be done.

Jack received his initial round of stem cell injections back in 2014 when he was around seven months old. Jack underwent a minimally invasive procedure in which fat tissue was collected from beneath the skin around his rib cage. The tissue was aseptically packaged and sent to the VetStem laboratory in Poway, California. VetStem lab technicians processed the fat to concentrate and extract the stem cells and created injectable doses of Jack’s own stem and regenerative cells. After quality checks were performed, the doses were shipped back to Dr. Hayes who received and injected them approximately 48 hours after the initial fat collection. Jack received an injection into each hip and intravenously.

Approximately nine months after his initial round of injections, Rebecca reported that Jack was getting around much better. According to Rebecca he was a whole new dog. He was able to walk on slippery floors and run and hop around the yard. Though he was still stiff after playing too hard or after lying down for a long while, Rebecca believes he would not have survived much longer had he not received stem cell therapy.

Fast forward nearly four years to January of 2018 when Jack received his second round of injections. Rebecca had maintained Jack’s stem cell bank over the years so Dr. Hayes was able to request recovery and preparation of Jack’s stored stem cells, rather than performing another fat collection procedure on him. This time, he received an injection in his left elbow, left hip, and intravenously. Approximately four months after the injections, Rebecca reported that Jack was doing well. Though occasionally stiff when he gets up, Rebecca said he does his stretches and is good to go. We recently checked in with Rebecca and she reported that Jack is “still on the move.”

Stem cells are regenerative cells that can differentiate into many tissue types, reduce pain and inflammation, help to restore range of motion, and stimulate regeneration of tendon, ligament and joint tissues. In a peer-reviewed study of dogs with chronic osteoarthritis of the hip joint, it was found that stem cells reduced lameness and pain.

About Andrea Hayes, VMD, DACVS
Dr. Andrea Hayes received her Veterinary Medical Degree from the University of Pennsylvania. She completed a joint surgical residency at the Cummings School of Veterinary Medicine at Tufts and Angell Animal Medical Center in Massachusetts. Dr. Hayes achieved her dream of helping dogs and cats by becoming a Board-Certified Surgeon specializing in orthopedics in 1996. Dr. Hayes has been VetStem Credentialed since 2008.