VetStem Biopharma is Pleased to Share the Success Story of Rascal who was Treated with VetStem Cell Therapy by Dr. Deborah Fegan

Rascal, a mixed breed, was treated with VetStem Regenerative Cell Therapy for arthritis in his knees and hips by Dr. Deborah Fegan at Big Creek Pet Hospital. 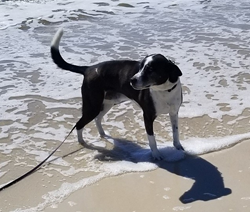 His spirit has improved a lot. Though I wouldn't describe him as a youngster again, he certainly has recaptured some of his youthful movement and spirit.

Rascal was adopted from a local shelter when he was around two years old. According to his mom, Karen, he is a “Heinz 57 mixed breed.” Unfortunately, just six weeks after he was adopted, he tore his right cruciate ligament. Though he had his ACL surgically repaired, it is common for arthritis to form in the joint after such a traumatic injury.

Sure enough, when Rascal was about nine years old, he began showing symptoms of arthritis. According to his mom, he was walking stiffly and was having trouble jumping into their van. He was put on pain medication and underwent treatment with laser therapy however his owners could tell he was still in pain. X-rays revealed that he not only had arthritis in his right knee, but he also had early arthritis in his left knee and both hips as well. His veterinarian, Dr. Deborah Fegan of Big Creek Pet Hospital had recently become credentialed to perform VetStem Regenerative Cell Therapy and recommended that Rascal receive stem cell therapy. Rascal would be her first stem cell patient.

In March of 2018, Dr. Fegan collected fat from Rascal during a minimally invasive surgical procedure and shipped it to the VetStem laboratory in Poway, California. VetStem lab technicians processed the fat and extracted the stem cells to create injectable doses of Rascal’s own stem and regenerative cells. After quality checks were performed, the stem cell injections were shipped back to Dr. Fegan and within 48 hours of the initial fat collection, Rascal received one stem cell injection into his right knee and one injection intravenously. Stem cells, when given intravenously, have been demonstrated to migrate to areas of inflammation. For Rascal, his IV injection was for the radiographic changes seen in both hips and his left knee.

According to Karen, Rascal had a wonderful response to the stem cell therapy. She noticed steady improvement in the six months after his treatment. He began walking better and started jumping in the van again. Instead of sleeping most of the day as he had been doing he had, “a renewed interest in life.” He began to play with and challenge his newly adopted Lab brother. Karen stated, “They run around outside and have a great time. His brother Toby might be quicker, but Rascal is right there to have fun with him.” Overall, Karen could tell Rascal was feeling great and enjoying his life pain free. Pleased with Rascal’s outcome, Karen stated they would not hesitate to pursue stem cell therapy for their lab, should he need it in the future.

Now, nearly ten months after his stem cell treatment, Rascal continues to do well. According to his mom, he is still jumping into the van and going up and down steps easily. Karen stated, “His spirit has improved a lot. Though I wouldn't describe him as a youngster again, he certainly has recaptured some of his youthful movement and spirit. We continue to be very happy with the results we have seen from the stem cell treatment.”

Stem cells are regenerative cells that can differentiate into many tissue types, reduce pain and inflammation, help to restore range of motion, and stimulate regeneration of tendon, ligament and joint tissues. In a peer-reviewed study of dogs with chronic osteoarthritis of the hip joint, it was found that stem cells reduced lameness and pain.

About Deborah Fegan, DVM
Dr. Deborah Fegan has owned Big Creek Pet Hospital since 1992. She received her bachelor’s degree from West Virginia University followed by her DVM from Purdue University in 1979. She began practicing veterinary medicine in the Cleveland area in 1985. She has been VetStem Credentialed since 2017.