VetStem Biopharma is Pleased to Share the Success Story of Sam Who was Treated with Stem Cell Therapy by Dr. Lucy Roberts at Animal Medical Center of Tuscaloosa

Sam, a German shepherd, was successfully treated for osteoarthritis in multiple joints and his spine with VetStem Regenerative Cell Therapy by Dr. Lucy Roberts. 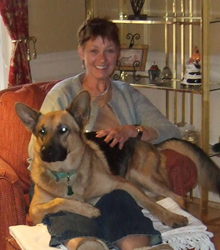 Every day I thank VetStem for their procedure which has changed Sam's life.

At five years old, Sam began having issues with his liver. X-Rays were taken to look for a possible tumor and instead, Sam’s veterinarian found that he had arthritis in his lower, or lumbosacral, spine. At the time, he was not experiencing any obvious discomfort, so his owner placed him on supplements for the arthritis and monitored his activity.

Within two years, Sam began slowing down and stopped wanting to take his daily walks. Sam’s owner took him to Dr. Lucy Roberts of Animal Medical Center of Tuscaloosa. Upon examination, it was determined that Sam’s range of motion was at 60% of what it should be in all four legs. He was started on an injectable medication and acupuncture. The combination of treatments seemed to help quite a bit and Sam was able to resume his daily walks.

Unfortunately, the relief Sam experienced was short lived. About nine months later, he began showing symptoms of discomfort again. This time, Dr. Roberts recommended using the tissue processing services at VetStem Biopharma. VetStem Regenerative Cell Therapy is a process by which a veterinarian collects a sample of fat tissue from a patient and sends it to the VetStem laboratory where the regenerative cells are separated from the fat tissue. The cells are returned to the veterinarian for appropriate injection techniques as determined by the attending veterinarian.

In March of 2017, Sam had full body X-Rays, which confirmed he had arthritis in both shoulders and both hips, along with the arthritis in his spine. Dr. Roberts then collected fat from Sam’s abdomen during a minimally invasive anesthetic procedure. The fat was aseptically packaged and shipped overnight to VetStem’s laboratory in San Diego, California. VetStem lab technicians processed Sam’s fat and prepared injectable doses of Sam’s own stem and regenerative cells to be shipped back to Dr. Roberts. Approximately 48 hours after the initial fat collection procedure, Sam received injections in both shoulders, both hips, intravenously and in the muscle along his spinal column (paraspinal).

Following treatment with these regenerative cells, Sam’s owner performed stretching and rehabilitation exercises at home to help with his healing. She reported that within three months, Sam’s joints were at 100% range of motion and his activity level improved. He continues to receive accupuncture, laser therapy, and supplements which his owner believes keeps him feeling his best. She states, “Some days he runs like a crazy man and wants to play with his dog friends at the park. Other times he runs in big circles and wants me to chase him.” In his older age, Sam is not as active as he was as a puppy, but his owner stated, “Every day I thank VetStem for their procedure which has changed Sam's life. I recommend it to every pet owner who has mobility issues.”

Stem cells are regenerative cells that can differentiate into many tissue types; they have been shown in published literature to reduce pain and inflammation, help to restore range of motion, and stimulate regeneration of tendon, ligament and joint tissues. Sam’s case was handled under VetStem’s clinical research program, as there is limited data to support the use of stem cell therapy in the treatment of spinal arthritis. Any inquiries regarding treatment of similar conditions or other non-standard indications should be directed to VetStem personnel.

About Lucy Roberts, DVM
Dr. Roberts grew up in Tampa, Florida, where she first began working in veterinary clinics. After graduating from the University of California Davis School of Veterinary Medicine in 2001, she finished an internship at the Colorado State University College of Veterinary Medicine in 2002. Dr. Roberts has since worked in private practice as a veterinarian for large and now small animals. She has a special interest in behavioral medicine and surgery, and she really enjoys getting to know every patient. Dr. Roberts has been VetStem Certified since 2010.