VetStem Biopharma Shares the Story of a Champion Horse Who Continues to Win After a Successful Stem Cell Treatment by Dr. John McCarroll

CP Merritt, a purebred Arabian, was treated with VetStem Regenerative Cell Therapy in 2007 for cartilage degeneration in his fetlock by Dr. John McCarroll of Equine Medical Associates. Over ten years after treatment with stem cells, Merritt is still competing and winning. 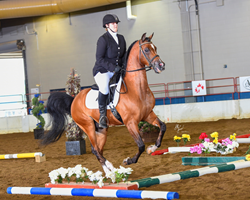 CP Merritt continues to give all that he has and is never happier than when he is in the show arena. We consider him a MEDICAL MIRACLE! VetStem Cell Therapy was the answer for Merritt.

CP Merritt is a national champion Arabian horse that currently competes in Second Level Dressage. He has been competing for many years however in 2006, he had a medical setback that caused him to limp at a canter and eventually at a trot. It was determined that he suffered from cartilage degeneration in his right rear fetlock. Such an injury could be career ending for a competitive horse like Merritt.

Fortunately, Merritt’s owners consulted with Dr. John McCarroll of Equine Medical Associates in Pilot Point, Texas. Dr. McCarroll, who had been utilizing VetStem Regenerative Cell Therapy for a few years by the time he examined Merritt, recommended treatment with stem cells. In August 2007, Dr. McCarroll extracted fat from the horse and sent it to the VetStem laboratory in Poway, California. There, the fat was processed to concentrate and extract the stem cells. One injectable dose of Merritt’s own stem and regenerative cells was shipped back to Dr. McCarroll while all the remaining cells were cryopreserved in Merritt’s stem cell bank. Within 48 hours of the initial fat collection, Merritt received one stem cell injection into his affected joint.

After stem cell therapy, Merritt began the slow process of getting back into condition. He steadily regained his strength and began showing in performance classes in 2008. In 2009 Merritt went on to win two Top Tens in Show Hack and Saddle Seat Equitation at Youth Nationals. At the time, he showed in English Show Hack and Dressage. His owner stated, “CP Merritt continues to give all that he has and is never happier than when he is in the show arena. We consider him a MEDICAL MIRACLE! VetStem Cell Therapy was the answer for Merritt.”

Now, over ten years later, Merritt’s fetlock remains sound and he continues to compete. This past summer at the 2018 Canadian Arabian National Championship Show, he placed Top Ten in English trail, both amateur and open, and Top Ten in adult amateur First Level Dressage. He was the 2018 Arabian Horse Association Region XI Champion in amateur English trail and the Reserve Champion in open English trail. Though his owners maintain his stem cell bank, Merritt has not required a stem cell injection since his initial treatment in 2007.

Stem cells are regenerative cells that can differentiate into many tissue types, reduce pain and inflammation, help to restore range of motion, and stimulate regeneration of tendon, ligament and joint tissues. In a clinical case series using VetStem Regenerative Cell Therapy in horses with tendon and ligament and joint injuries, it was found that regenerative cell therapy (adipose-derived stem cells) allowed horses to return to full work or to the activity level that the owner desired.

About John McCarroll, DVM
Dr. John McCarroll is a well-known and respected equine veterinarian in Texas. He received his DVM from Texas A&M in 1977 and opened his practice in 1979. He has been practicing equine medicine exclusively since 1981 and has been using VetStem Regenerative Cell Therapy since 2005.