San Fransisko, or Sisko, a German warmblood, advanced in his dressage career after treatment with VetStem Regenerative Cell Therapy for cervical facet disease. 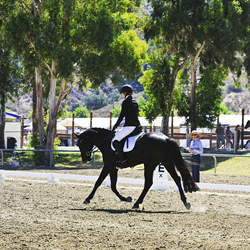 Without a doubt, Sisko would not have recovered and been able to resume his dressage career if he hadn’t received the stem cell treatments.

San Fransisko, or Sisko for short, is a German warmblood with an impressive pedigree. His owner, Deborah, purchased him at four years old to pursue a career in dressage. According to Deborah, dressage came easy to Sisko and his trainer commented that he was the most talented horse that she’d ever worked with. Unfortunately, Sisko suffered an injury while playing in his pasture. Deborah reported that he jammed his neck and suddenly refused to go forward leading Deborah to seek medical attention.

After several visits to an equine lameness expert and numerous diagnostic tests, it was determined that a few of Sisko’s neck vertebrae were malformed, causing pain in his neck and rendering him unable to work in his chosen field. Cervical facet disease can be caused by developmental conditions and/or injuries which can lead to osteoarthritis and spinal compression in the neck. Conventional treatments for the degenerative joints may reduce inflammation and pain but ongoing degeneration of the facet joints and their supportive structures can occur, leading to eventual worsening of pain and symptoms.

Fortunately, Sisko qualified for a clinical research program that is being conducted by VetStem to study the effects of VetStem Regenerative Cell Therapy on horses with cervical facet disease. To begin the process, Sisko’s veterinarian collected fat from Sisko’s tailhead and shipped it to the VetStem laboratory in San Diego, California for processing. VetStem laboratory technicians aseptically processed the fat to extract the stem cells and create injectable doses of Sisko’s own stem and regenerative cells. These doses were shipped back to Sisko’s veterinarian for injection into the affected joints and also intravenously. Due to the severity of Sisko’s case, he received a follow up treatment approximately six weeks after the initial treatment.

According to Deborah, Sisko began to improve and slowly went back to work after a lengthy rehab. He eventually regained complete mobility in his neck in both directions and was able to resume his training. In one year, he moved up from Training Level to First Level and in 2018, completed his first full year of showing. He ended the year as First Level Champion for the California Dressage Society, Temecula Valley Chapter, in both of their series of Rated and Schooling shows. He also won their award for High Score in a Single Test for both the Rated and Schooling shows as well as the Chapter’s Warmblood breed award. Deborah stated, “Without a doubt, Sisko would not have recovered and been able to resume his dressage career if he hadn’t received the stem cell treatments. I’m very grateful to my knowledgeable veterinarian for his continued help with Sisko and to VetStem for storing his stem cell reserves in case he needs them in the future.”

Stem cells are regenerative cells that can differentiate into many tissue types, reduce pain and inflammation, help to restore range of motion, and stimulate regeneration of tendon, ligament and joint tissues. Sisko’s case was handled under a VetStem clinical research program, in an effort to gain more information about stem cell use for this condition. Any inquiries regarding treatment of similar conditions or other non-orthopedic indications should be directed to VetStem clinical research personnel.