Bold Brahim aka Jesse, a 24-year-old Spanish Arabian, was treated with VetStem Cell Therapy at the age of eleven for a torn deep digital flexor tendon. 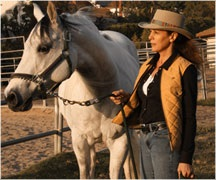 ...the deep flexor tendon has stayed strong and has served him well all of these years.

Bold Brahim aka Jesse, a Spanish Arabian, was 11 years old when he suddenly went non-weightbearing lame on his right front leg. After several weeks of medical management, his condition worsened so his owner, Diane, sought a bone scan and MRI with Dr. Mark Martinelli of California Equine Orthopedics. Results revealed Jesse had a severe injury to his deep digital flexor tendon in his right front hoof capsule. Due to the severity of the injury, Dr. Martinelli recommended treatment with VetStem Cell Therapy and also referred Jesse to Dr. Sylvia Ouellette who specializes in equine lameness diagnosis and treatment.

Diane started an extensive rehabilitation plan laid out by Dr. Ouellette. The initial projection was that Jesse’s tendon would require a minimum of 15-18 months of diligent rehabilitation if it stood any chance of healing. At the same time, both veterinarians continued to recommend Jesse receive VetStem Cell Therapy to improve his chances of success. After researching the treatment and having a setback in the rehab, Diane agreed to move forward with stem cell therapy.

Dr. Ouellette collected fat from Jesse’s tailhead in a minimally invasive surgical procedure. The fat was packaged and shipped overnight to the VetStem laboratory in Poway, California. Once received, VetStem laboratory technicians processed the fat to extract Jesse’s stem and regenerative cells and created an injectable stem cell dose. Jesse’s stem cell injection was prepared for Dr. Martinelli who received and injected the cells within 48 hours of the initial collection. Jesse received one injection into his injured tendon.

Jesse and Diane’s journey was not over yet, however. Jesse continued a rigorous rehabilitation schedule and experienced a few setbacks after which his improving lameness regressed. It was two years after his initial injury when Diane finally received the good news that Jesse was sound.

In a recent update from Diane, she reported that Jesse is now 24 years old and his tendon has remained sound. She stated, “Though he has other age-related health issues, the deep flexor tendon has stayed strong and has served him well all of these years.”

Stem cells are regenerative cells that can differentiate into many tissue types, reduce pain and inflammation, help to restore range of motion, and stimulate regeneration of tendon, ligament and joint tissues. In a clinical case series using VetStem Regenerative Cell Therapy in horses with tendon and ligament and joint injuries, it was found that VetStem Regenerative Cell Therapy helped these horses to return to full work or to the activity level that the owner desired.

About Mark Martinelli, DVM, PhD, DACVS, DACVSMR
Dr. Martinelli received his DVM from Michigan State University. He completed a surgical residency at the University of Illinois and then moved to Scotland where he lectured in equine surgery while completing a PhD in joint disease. He received his Diplomate status with the American College of Veterinary Surgeons in 1998. Dr. Martinelli owns California Equine Orthopedics where he specializes in the diagnosis and medical or surgical treatment of sports medicine issues of the equine athlete.

About Sylvia Ouellette, DVM, DABVP
Dr. Ouellette received her DVM from the University of California at Davis in 1995. She currently practices in Oregon at Oakhurst Equine Veterinary Services. In 2005 Dr. Ouellette became board certified as an equine specialist with the American Board of Veterinary Practitioners. She specializes in lameness in the sport horse.