VetStem Biopharma Shares the Success Story of Tucker who was Treated with VetStem Cell Therapy by Dr. Glenn Behan

Tucker, a Labrador retriever, was treated for osteoarthritis in his hips and elbows with VetStem Regenerative Cell Therapy by Dr. Glenn Behan of Barnegat Animal Clinic. 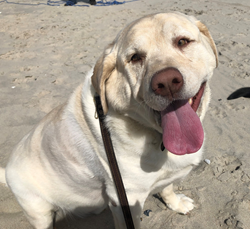 Tucker on the beach

He was able to actually run on the beach and through the surf for the first time without pain.

Tucker, a Labrador retriever, was just a puppy when he began to show symptoms of osteoarthritis. At only four months old, Tucker was limping and lame on his right hip and elbow. At one year of age, Tucker was diagnosed with bilateral hip and elbow dysplasia and it was called “the worst case the vet had seen.” He was prescribed pain medications, both oral and injectable, as well as nonsteroidal anti-inflammatories (NSAIDs). He continued his medications and limited physical activity for approximately four years at which time his owners were introduced to VetStem Regenerative Cell Therapy.

Tucker’s veterinarian, Dr. Glenn Behan of Barnegat Animal Clinic has been providing VetStem Cell Therapy since 2010. In January 2019, he collected fat from Tucker’s thoracic wall and sent it to the VetStem laboratory in Poway, California. Once received, VetStem lab technicians processed the fat to extract Tucker’s stem and regenerative cells and created injectable stem cell doses. Tucker’s stem cell injections were sent back to Dr. Behan and approximately 48 hours after the initial fat collection, Tucker received one injection into each hip and each elbow.

Despite his pain, Tucker was always a happy Lab. Approximately one month after stem cell therapy, his owners noticed that he was feeling even better. His energy level was up, he could get up and down with more ease, and stairs were easier to climb. After approximately six weeks, Tucker could walk further distances and his limp subsided. His owner stated, “He was able to actually run on the beach and through the surf for the first time without pain. There was almost a hop in his step which we had never seen before. Now, months post-surgery, Tucker's physical abilities can finally keep up with his bright and energetic personality. Our family could not be more pleased with the results of this therapy.” In a 90-day follow up survey, Tucker’s owner reported that he was able to discontinue his pain and anti-inflammatory medication and his quality of life was significantly improved.

Now, over seven months since he received VetStem Cell Therapy, Tucker continues to do great. With his increased activity, he’s lost ten pounds and is getting around so much better. He continues to go on walks, up and down stairs and even jumps on the bed, which he could not do before. He’s also playing a lot more with his little brother. He still does not require pain or anti-inflammatory medication and his owners remain very pleased with his results.

Stem cells are regenerative cells that can differentiate into many tissue types, reduce pain and inflammation, help to restore range of motion, and stimulate regeneration of tendon, ligament and joint tissues. In a peer-reviewed study of dogs with chronic osteoarthritis of the hip, it was found that stem cells reduced lameness and pain.

About Glenn Behan, DVM
Dr. Glenn Behan received his DVM from the University of Illinois in 2004. He enjoys all aspects of canine and feline medicine, surgery and dentistry. He became credentialed to perform VetStem Cell Therapy in 2010 and has treated several of his own dogs with stem cells.