Victor Udoidiong’s newly released “The Mountain, Called Church Doctrine” is a profound work that swaps misunderstandings for knowledge and insight on the Word

“The Mountain, Called Church Doctrine” from Christian Faith Publishing author Victor Udoidiong shares a brilliant way for the devout Christian to move towards spiritual growth and find in-depth understanding of the Scriptures. 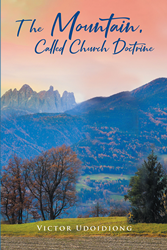 Udoidiong shares, “This book, The Mountain Called Church Doctrine speaks about the power in the Word of God which has existed from the beginning and has glowed over the years from generation to generation. It also points out that the Word of God has not diminished in value rather the potency keeps on growing every blessed day.

“The value in the Word is the ability to understand and obey it to the letter irrespective of who is involved. The church is subject to the Word, so also is obedience demanded as a mark of acceptance and submission. Every Word comes out with a mission to accomplish, reward, and to render account to the Creator.

“Hence, the Word is not subject to modernisation that the changes will affect its originality and potency but rather modernisation is subject to the Word which must conform to it. Therefore, the Church which is the body of Christ must adopt and adapt the Bible doctrines and ordinances given as a mark of submission.”

Published by Christian Faith Publishing, Victor Udoidiong’s new book is an amazing creation that reminds each person to value life and live in the world. By linking the past and present, the author hopes that his book leads a person to embrace the Word as it has always been.

View a synopsis of “The Mountain, Called Church Doctrine” on YouTube.

For additional information or inquiries about “The Mountain, Called Church Doctrine,” contact the Christian Faith Publishing media department at 866-554-0919.