In ’13 Months,’ author Bruce A. Bastien reflects on his experiences as a young U.S. Marine Corps grunt serving a 13-month tour in Vietnam 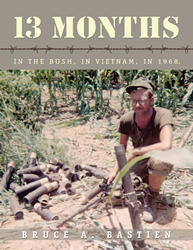 "This is a personal account of the feelings, frustration, horror and friendships, of a young man under very exceptional conditions. It describes the grassroot experiences of a young marine on a mission for his country, but where questions arise of the ultimate purpose, the Why."

For many Americans, the Vietnam War often conjures mental images of high-action military combat overseas, unprecedented frontline media coverage of the war as it unfolded in Vietnam, and tensions across the U.S. as protestors called for the war to end. In “13 Months: In the Bush, In Vietnam, In 1968,” author Bruce A. Bastien draws back the curtain of this high-conflict period to share his experience as a young Marine – both the common notions of war and the mundane, daily life experiences that shaped his 13-month tour of duty.

“13 Months” sweeps readers up on a coming-of-age journey through a U.S. Marine Corps grunt’s daily struggles, battles, and funny moments as he navigates a new and sometimes unforgiving environment. Bastien’s book shares with readers the range of emotions and physical discomfort he experienced during his service, from unmitigated terror to utter boredom, hot and dry to wet and cold, rested and ready to frazzled and wired.

“13 Months” also shares Bastien’s experience maturing from a young man to an adult as he grows philosophically, finds his confidence, develops the ability to handle stress and strain, and learns lessons about friendship, love, difficulty, danger, deprivation, and loss. Bastien reflects on his friendship with the other American men with whom he served who came from all different walks of life, backgrounds, races, and levels of learning. The common element among them was their humanity, bravery, and willingness to risk their lives to help one another, all the while hoping to find their way back home.

“This is a personal account of the feelings, frustration, horror and friendships, of a young man under very exceptional conditions. It describes the grassroot experiences of a young marine on a mission for his country, but where questions arise of the ultimate purpose, the Why,” Mårten Wikström wrote in an endorsement of the book. “It is not a story of heroes, but a sincere description of what a young American boy experienced. What was the purpose of this war? And even, what was the purpose of some of the movements of the soldier’s unit? This is a very realistic story of how many young Americans must have experienced their role in Vietnam. The narrative doesn’t dwell in excesses, or drama, yet describes the horror and fright very clearly, but also the extreme boredom and man-to-man conflicts that arose.”

Ultimately, Bastien’s book is a gripping and unforgettable story peppered with supporting photos about a boy’s journey to becoming a man that highlights the incredible power of camaraderie and friendship. “13 Months” keeps the memories of the people who served during the Vietnam War alive and provides a glimpse into the negative impact and harrowing toll of war on individual lives.

About the author
Bruce A. Bastien has had dual careers in data processing and aviation. Bastien’s previous roles include computer salesman for IBM, business applications computer programmer, consultant, and owner of a “Cloud” service bureau business that hosts client business applications. He has also worked as a flight instructor and owner of a Part 135 on-demand airline, and he earned commercial pilot and flight instructor certificates for single and multi-engine aircraft with instrument ratings. Bastien holds degrees in biometry, computer science, and accounting. He currently resides in San Diego with his wife, Carol. To learn more, please visit http://www.scsstories.com.