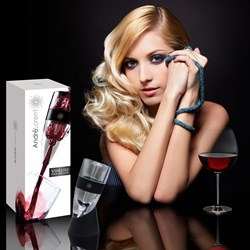 We’ve gotten incredible feedback on the VinLuxe Wine Aerator from both the wine community and the media.

The founder of Andre Lorent Lifestyles, the luxury accessory company that created and distributes the VinLuxe Wine Aerator, says that sales have taken a dramatic leap since their new video for the VinLuxe was released on YouTube just two days ago.

Ben Cummings, the founder of Andre Lorent Lifestyles, says that while the VinLuxe Wine Aerator has been doing very well without much publicity, the release of the video demonstrating the VinLuxe has resulted in a sharp increase in demand.

“It’s actually taken us quite by surprise,” explains Cummings. “We’re a small, boutique company and we only offer a few very special products. We’re not a big-box store, so we’re busy now just trying to replenish our stock so that we can fulfill the orders coming in.”

According to company figures, sales have increased by a full 23% since the video premiered two days ago on YouTube. The video demonstrates the use of the VinLuxe and explains the VinLuxe’s three-step wine aeration process. That process fully opens or aerates wine 300% faster than decanting.

“As we show on the demonstration video, the process only takes a few seconds, but the difference it makes in the wine is enormous,” Cummings adds. “We’ve gotten incredible feedback on the VinLuxe Wine Aerator from both the wine community and the media. The difference in flavor is just spectacular.”

The video is being shown only on YouTube.com. Viewers will also be able to take advantage of a special 25% discount code shared at the end of the video. This special code is only available through the video and for a limited time, to mark the video’s premiere.