New virtual reality experience, created by EDF, shines a light on the many threats facing the Monarch butterfly population on it’s 3,000-mile annual migration and the efforts to save this important pollinator. Farmers and ranchers across the U.S. are working to give monarchs an edge in their race to survive. 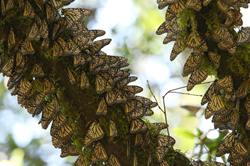 “Being surrounded by millions of monarchs during our shoot in Mexico was one of the most surreal and magical moments of my life,” said Eric Holst, associate vice president for working lands at EDF.

The journey begins in the oyamel fir forests of central Mexico, where tens of millions of monarchs spend the winter. Viewers then join consecutive generations of monarchs as they fly north into the American heartland looking for the milkweed and wildflower habitat they need to survive.

“Being surrounded by millions of monarchs during our shoot in Mexico was one of the most surreal and magical moments of my life,” said Eric Holst, associate vice president for working lands at EDF. “This technology transports people there, letting them feel that same sense of awe.”

Monarch populations have plummeted 90% over the past two decades due to habitat loss, pesticide use, and extreme and variable weather. The species is a bellwether for the overall health of ecosystems and working lands.

Now, farmers, ranchers and entire communities are stepping up to ensure this beloved butterfly recovers and thrives for generations to come.

“Monarch butterflies migrate right through the Corn Belt. Farmers along that migration path, including those featured in The Monarch Effect, prove that pollinator habitat can be integrated into productive operations,” said Nathan Fields, vice president of production and sustainability at NCGA.

Meet the Farmers and Ranchers Behind The Monarch Effect
Monarchs, and the viewers accompanying them, make two pit stops on the migration north. Amy and George Greer, sixth-generation cattle ranchers, greet them at Winters-Wall Ranch in Brady, Texas. Kevin and Sara Ross and their kids, sixth- and seventh-generation grain and cattle farmers, greet them at Ross Land and Cattle in Minden, Iowa.

“While we say that this is our ranch, it’s not really ours. It’s really habitat for all the other critters that live here, use it and move through, like the monarchs,” said Amy Greer.

“For us, it’s about biodiversity. We need different grasses and feedstocks for our operation,” said Kevin Ross, first vice president of the NCGA Corn Board. “When you’re walking along these rural roads seeing milkweed and the monarch life cycle in action, watching that process, it’s a neat deal.”

Learn how farmers and ranchers like the Rosses and Greers are setting The Monarch Effect in motion at edf.org/TheMonarchEffect.

How to Experience The Monarch Effect
Experience the full monarch journey at edf.org/Monarch180.

We also invite you to experience The Monarch Effect during the following National Pollinator Week events:

Founded in 1957, the National Corn Growers Association represents more than 40,000 dues-paying corn farmers nationwide and the interests of more than 300,000 growers who contribute through corn checkoff programs in their states. NCGA and its 49 affiliated state organizations work together to create and increase opportunities for corn growers. For more information, visit http://www.ncga.com.