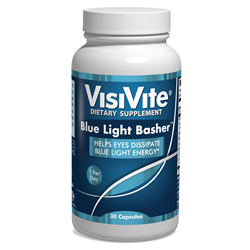 "Studies in the laboratory show that blue light can cause cellular damage, either directly to retinal cells or to the supporting retinal pigment epithelial cells directly below the retina.”

In creating an eye vitamin formula that targets blue light protection, President and CEO, Dr. Paul Krawitz stated, “High energy blue light is everywhere – cell phones, TV’s LED lights and sunlight itself. While no studies thus far show that blue light causes macular degeneration, studies in the laboratory show that blue light can cause cellular damage, either directly to retinal cells or to the supporting retinal pigment epithelial cells directly below the retina.”

Sunlight contains much blue light, but because it contains a mixture of the complete spectrum of visible colors, we don’t perceive the light as being blue. LED lights, televisions and computers, on the other hand, emit more blue light than traditional light sources. Blue light can stimulate your biological circadian clock, keeping you awake, disrupting sleep, or having adverse effects on your circadian rhythm

High energy blue light is visible and directly next to ultraviolet on the light spectrum. In other words, it’s the first high-energy light in the light spectrum that we are able to see, and it’s only a few wavelengths away from ultraviolet light. Blue light is of concern because it has more energy per photon of light than other colors in the visible spectrum. Blue light, at high enough doses, is therefore more likely to cause damage when absorbed by various cells in our body.

Fortunately, the plant world, exposed to all-day light from the sun, has already developed mechanisms for protecting itself against high energy light, including Ultraviolet A, B and C, as well as blue light. And the answer lies in the antioxidant properties of its colorful pigments.

These pigments not only help to absorb light and convert it to food and energy that the plant can use, but because there is in many cases an excess of light energy required for growth, the pigment also has the ability to dissipate the high energy light that can activate unstable forms of oxygen, which cause damage from “oxidation.”

VisiVite Blue Light Basher is free of sugar, artificial colors, synthetic fillers, gluten, soy and GMO. It is supplied as a one-month bottle of 30 vegetarian capsules.

VisiVite Blue Light Basher is available for retail sale on VisiVite.com and Amazon.com. Applications for wholesale accounts can be made at calling 1-800-427-7660 Ext 2 or online at https://wholesale.visivite.com/accounts/sign_up.