Vocational Rehabilitation shares another success story this May in honor of Borderline Personality Disorder Awareness Month. 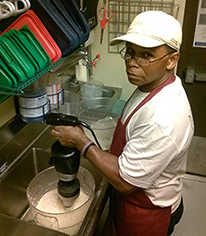 Michael Benders prepares batter for the crepes at the Flying Pan restaurant.

Michael’s ability to overcome his addiction, homelessness, and his personality disorder is what truly makes him an inspirational person. Becoming gainfully employed has played a role in this positive journey.

When Michael Benders first met Vocational Rehabilitation (VR) Counselor Rockne Lee, he was homeless and a recovering drug addict with a personality disorder, but he was determined to turn his life around, and that’s why he came to VR. Rockne helped Michael find a place at the homeless shelter and started working with him to provide the services he needed to get back on his feet and working again.

Rockne connected Michael with Job Coach Jason Bray at Hope Services. Jason helped Michael create a resume, practice interviewing, and look for a job. It was difficult for Michael to find a job because of his former drug addiction and incarceration. He went on a number of job interviews but they all fell through. He had a realistic view of his chances to get a job because of his history, but he still kept at it.

Michael used the skills Jason taught him to find a job at the Flying Pan, a new restaurant recently opened at 2702 W Kennedy Blvd. in Tampa. As the restaurant was being built, Michael would often pass the construction site, and he struck up a conversation with the owner, offering to work in the restaurant doing whatever was needed.

The Flying Pan decided to give him a chance and allowed Michael to do maintenance for the restaurant. He continues to prove his outstanding work ethic and now, along with washing the dishes and cleaning the kitchen, he is responsible for the prep work of the crepes that are the signature dish for the restaurant.

Jason is very proud of Michael and says, “His manager, Sara, says that they couldn’t ask for a better employee. They just love having him on board.” Sara feels that Michael’s positive attitude at work is what makes him such an influential part of the team. He’s definitely a “glass half full” kind of guy.

Michael is happy with his new job and is thriving. With his steady employment, he has been able to rent and furnish an apartment with cable TV, and is saving money to buy a car.

“Michael had so much stacked against him, but every time something would happen, he would say he wasn’t going to let it get him down,” says Rockne. “He remained fully committed to his goal of acquiring gainful employment and personal independence.”

Michael hasn’t forgotten the low point in his life and volunteers to feed the homeless every Sunday morning with Open Arms for the Homeless. “We feed 175 people every Sunday morning,” says Michael. “I help them with kitchen work and maintenance. I’ve been in recovery for two and a half years now; I’ve quit smoking. I enjoy volunteering and giving back to my community. It makes me feel good about myself.”

Michael’s long-term goal is to get his driver’s license back and become a truck driver once again – his first love. He figures it should take about three years to “finish my project,” and then he will be back on track.

Rockne sums it up, “Michael’s ability to overcome his addiction, homelessness, and his personality disorder is what truly makes him an inspirational person. I believe that his ability to become gainfully employed has played a role in this positive journey.”

About Vocational Rehabilitation
Florida’s Vocational Rehabilitation (VR) is a federal-state program committed to helping people with disabilities become part of America’s workforce. Our employer-focused website, http://www.FLJobConnections.com, allows businesses to search at no charge for employees who are ready to go to work, as well as to post available jobs. VR has 80 offices across Florida, and last year helped 6,523 Floridians with significant disabilities find or keep a job. For more information about VR and its services, call (800) 451-4327 or visit http://www.Rehabworks.org.