VT authors Robert and Steven Neale’s new book “Utopia: In the Near Future” is a thrilling sci-fi adventure about the colonization of Mars in the mid-21st century

Recent release “Utopia: In the Near Future” from Page Publishing authors Robert and Steven Neale is the first of seven twelve-chapter volumes documenting the life, adventures, and crisis of the dashing Commander Scott Powers and his beautiful fiancé, Lucy Carter as they cope with the daily stress and unexpected surprises they will encounter managing the Utopia mining colony. 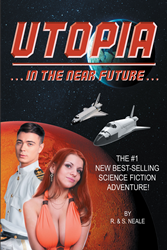 Robert and Steven Neale are lifelong science fiction fans who grew up inspired by the works of Ray Bradbury and Gene Roddenberry and now reside in northern New England. They have published their new book “Utopia: In the Near Future”: an entertaining science fiction adventure that keeps the pages turning until the satisfying conclusion. All dashing Commander Scott Powers ever wanted to do was to work on Mars. He joined the Navy and studied aerospace engineering, and while he was in college, water was discovered on Mars—liquid water! Almost immediately, the race for Mars was on, despite major political turmoil between the West and Russia and China, who both had expansionist visions. Upon graduating with high honors and receiving his Navy commission, Powers was assigned to the new Space Shuttle Design and Construction program at Space Command in Florida. The story begins on December 2043. Man has been on Mars for twenty years, and it is finally Scott Powers’ turn. Admiral Charles Sherman from Space Command in Florida has selected Powers to replace retiring commander Brian Rice at Utopia. The one-thousand-plus men and women of mankind’s first off-world mining and research base, along with all its problems and complications, will now be under Powers' command. He thinks of his bride-to-be, Lucy Carter, who left him at the altar five years ago to accept a posting on Mars. Memories of her flood his mind as he boards the transport shuttle for the forty-three-day trip to the Red Planet.

Published by Page Publishing, the Neale’s engrossing book is an excellent choice for avid science fiction readers. Readers who wish to experience this engaging work can purchase “Utopia: In the Near Future” at bookstores everywhere, or online at the Apple iTunes store, Amazon, Google Play, or Barnes and Noble. For additional information or media inquiries, contact Page Publishing at 866-315-2708.