W.A. Mozart Saves the Best for Last with the KSO and St. Peter in Chains Cathedral Choir

The Kentucky Symphony Orchestra and the St. Peter in Chains Cathedral Choir explore the mature Mozart via his "Jupiter" Symphony and Requiem. 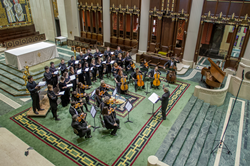 Mozart was aware that the Requiem was likely his final opus. — James Cassidy, KSO Music Director

The Kentucky Symphony Orchestra teams up with one of Cincinnati’s top choirs —The St. Peter in Chains Cathedral Choir — to present Wolfgang Amadeus Mozart’s latest and perhaps greatest works. In 1984, thanks to the film Amadeus, the music of Mozart became universally known and celebrated. From child prodigy to prolific composer, Mozart’s catalog includes a diverse array (opera, symphony, concerto, etc) of the greatest music in history.

Mozart’s final years produced his last symphonies (39-41), all three written within just six weeks in the summer of 1788. They are all masterpieces, yet his 41st subtitled “Jupiter” stands at the pinnacle of symphonic form. With its recurring 4-note plain chant motive, opera aria quotation and 5-subject fugue, Mozart’s final symphony is a profound work employing truly awe-inspiring counterpoint influenced by his study of the works of Bach, Handel and Michael Haydn.

Following a brief intermission, the professional, 24-voice St. Peter in Chains Cathedral Choir, assembled in 1994 by its current Music Director Anthony DiCello, joins the KSO and soloists for Mozart’s hauntingly beautiful Requiem in D minor. Unfinished at his death in 1791, Mozart’s mass for the dead was completed by his student Franz Süßmayr (many composers over the years have offered their own completions of Mozart’s Requiem, yet Süßmayr’s is the default version for most performers). Soloists for the Requiem include soprano Victoria Okafor, mezzo-soprano Maria Miller, tenor Marco Panuccio, and bass Samuel Kidd.

Though commissioned by an anonymous patron (who wished to claim authorship and dedicate its performance to his deceased wife — not the intrigue of Antonio Salieri as in the movie), Mozart’s Requiem is a deeply personal piece upon which Mozart worked until his final hours. Music Director James Cassidy points out — “A five-note motive that opens and weaves its way throughout the work appears to be a quote of Handel’s “The ways of Zion do mourn” and is reminiscent of the Lutheran hymn — “When my final hour is at hand.” So, Mozart was aware that the Requiem was likely his final opus.”

The St. Peter in Chains Cathedral Choir, which can be heard at 11 a.m. Sunday masses (Sept - May), has been a special recent KSO collaborator, singing our pairing of 16th c. Giovanni Gabrieli motets and antiphonal music and the premiere of Kim Arnesen’s Magnificat in 2016. Last season, the KSO and Cathedral Choir gave the North American premiere of Paweł Łukasewzski’s dramatic Via Crucis, illuminating the Cathedral’s Stations of the Cross.

About the KSO:
For 27 years the Kentucky Symphony Orchestra has taken the “phony” out of symphony by eliminating traditional barriers and presenting engaging, live, thematic concerts that enrich, educate and entertain the residents of Northern Kentucky and Greater Cincinnati. The KSO performs three series of concerts annually throughout Northern Kentucky.