W.C. Whitney’s newly released “The Beginning of the End of Time” delves into the book of Revelation and its prophecies concerning God’s final judgment on the earth

“The Beginning of the End of Time” from Christian Faith Publishing author W.C. Whitney is an in-depth account of the book of Revelation and its underlying teachings on the end times and God’s final will on mankind. 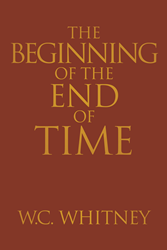 Whitney shares, “The beautiful book of Revelation is the Lord’s own ‘emergency preparedness handbook.’ It was given to us two thousand years ago as a fire drill for the end of time so no one would have to be caught unaware. No one knows exactly when God will say, ‘Enough!’ as he did in Noah’s generation when he saw how great man’s wickedness had become on the earth, being only evil all the time. His heart was so grieved, he said, ‘I will wipe mankind off the face of the earth.’ And he did. Noah was the only man on the planet who knew great waters were about to flood the entire earth. He and his family survived that first apocalypse because he acted on the warning. The Revelation is God’s warning for this and every generation. He did not hide the warning of the end of time in a sacred vault. Every detail of the end is available in the last book of the Holy Bible. We only have to study it to show ourselves approved.”

Published by Christian Faith Publishing, W.C. Whitney’s new book hopes to enlighten readers of God’s grand plan for the world’s final redemption through the profound teachings within the book of Revelation.

This book presents Old testament and New testament wisdom that corroborate the knowledge of the Revelation regarding the nearing end of times and humankind’s judgment by God on His heavenly throne.

View the synopsis of “The Beginning of the End of Time” on YouTube.

Consumers can purchase “The Beginning of the End of Time” at traditional brick-and-mortar bookstores or online at Amazon.com, Apple iTunes store, or Barnes and Noble.

For additional information or inquiries about “The Beginning of the End of Time,” contact the Christian Faith Publishing media department at 866-554-0919.