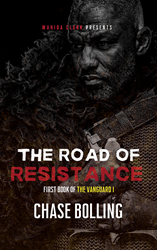 The Road of Resistance Book Cover

Four-time New York Times bestselling author Wahida Clark, a.k.a. “The Queen of Street Lit,” and founder of Wahida Clark Presents Publishing (WCP)—the fastest growing independent urban publisher—is proud to launch the new imprint, Sci-Fi Fantasy for the Culture (SF/F), to house WCP’s science fiction and fantasy titles. The prolific author has sold millions of copies of her books worldwide and is proud to announce the release of SF/F’s “The Vanguard” series by Chase Bolling, who will also head the imprint as Managing Editor.

On launching the new imprint, Clark says, “We went on a search for talent and found Chase Bolling, author of ‘The Road of Resistance: The Vanguard I’—an epic tale of survival after a rogue defense AI traps weapons technology in the dark ages, plunging the world into chaos. His story captured my imagination, and his drive and talent made him a natural fit for this new chapter at WCP.”

Bolling’s popular independently released “The Road of Resistance” is being released in a second edition by WCP on November 17, 2020, in two books: Part 1 and Part 2.

Graphic, action-packed, and emotionally charged, “The War We Make: The Vanguard II” is the next episode in the struggle for the soul of America, which will be available on November 27, 2020.

“Chronicle of the Unbroken: The Vanguard III” is slated for release on February 1, 2021, in conjunction with Black History Month.

The next book in the series, “The Juneteenth Campaign: The Vanguard IV,” is slated for release on June 19, 2021.

Bollings says, “It’s honor to be working with Wahida Clark and launching the WCP SF/F division with The Vanguard titles, which are a Street-Lit-meets-epic-medieval-fantasy series. Influenced by hip-hop culture and Black Lives Matter, the novels are inspired by great storytellers like Milton Davis, Christian Cameron and Charles R. Saunders. I welcome readers to this fantasy world that is abundant with romance, magical realism, sword and soul, and Arthurian themes.”

Other upcoming SF/F releases include Clark’s “Emperors and Assassins,” “Loners” and “The Light Brigade,” co-authored with DB Bray.

“The Vanguard” Series is available for pre-order now at http://www.wclarkpublishing.com/genres.

About SF/F
At Wahida Clark Publishing’s “Sci- Fi Fantasy For the Culture” (SF/F) Division, we believe in amazing science fiction, fantasy and speculative fiction stories told from unique, and underserved perspectives, in their own voice. Speculative fiction is what shapes our imagination, and in turn inspires how we shape the world we live in. Now more than ever, we need new voices, new heroes, and new stories. With that in mind, we move forward with a commitment to elevate and amplify SF/F with a focus on Melanated spaces, publishing world-class books produced by world-class imaginations. This is SF/For the Culture: Unapologetically Amplified Lit.

About Wahida Clark
Dubbed the official “Queen of Street Lit,” Wahida Clark has sold millions of copies of her 17 novels, including one New York Times bestseller with Hachette Publishing and three New York Times bestsellers with Simon & Schuster’s Cash Money Content, the publishing arm of the iconic record label Cash Money Records (home to Drake, Lil Wayne, and Nicki Minaj). Her publishing firm, Wahida Clark Presents Publishing, currently houses 30 plus authors, who have published and distributed nearly 100 books. She is the vice president and business development officer of the non-profit Prodigal Sons and Daughters Redirection Services, which specializes in supporting prisoner re-entry and transition, homelessness and Food Banks, in Georgia, New Jersey and Florida—currently serving over 20,000 people. Clark was recently named Director of International Business Development for Prodigal Sons & Daughters Behavioral Health and has been featured in major media, including USA Today, Essence, Ebony, Atlanta Journal-Constitution, Vice, Roxanne Shante, Sway in the Morning, DJ Kay Slay, and many more.