Want to Move Out of the U.S.—But Not Sure Where to Go? International Living Launches Overseas Retirement Calculator, Which Points to Best Options

International Living’s new Overseas Retirement Calculator is a free tool designed to point people interested in relocating abroad to their best options around the world and how soon they’d be able to retire there, based on their age, savings, and budget. 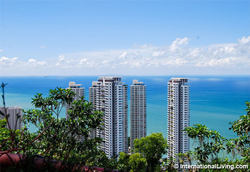 “Next, they want to know where to go and how soon they could get there. Our new Overseas Retirement Calculator was designed to answer those questions.”

An increasing number of Americans are investigating their options for better living outside the U.S. and International Living’s new Overseas Retirement Calculator was created to point them to the places where their budgets would provide for good-value living and where, in fact, they could afford to retire much earlier than if they stayed home.

“At International Living, we’re seeing a massive surge in queries about moving out of the U.S.,” says Jennifer Stevens, IL’s Executive Editor. “The first thing people want to know is if it’s even possible to do. It is—and it can be easier and more affordable than most people realize.

“Next, they want to know where to go and how soon they could get there. Our new Overseas Retirement Calculator was designed to answer those questions.”

Stevens says, “In all sorts of places around the world, it costs so much less to live well than it does in the States, you can afford to retire much sooner than you may think. Instead of saving until you’re 66 in hopes that’ll give you enough to live on going forward, you might well have enough saved already—if you go to a place where the cost of living is half (or less) what it would be at home.”

International Living’s Overseas Retirement Calculator—hosted here—is designed to show people some of the best options they have—and how soon, given their financial situation—they could take advantage of a retirement there.

A user inputs data about age, savings, and projected retirement budget, and the calculator generates overseas options to consider—all countries where, given the income parameters, a person could live comfortably. These destinations are in Latin America, Southeast Asia, and Europe and all appear on International Living’s annual Global Retirement Index, which details the world’s top retirement locales.

IL’s Overseas Retirement Calculator assumes the user in the U.S. has a target retirement age of 66. And it generates, given the data a user inputs, a revised target retirement date for each of 24 good-value places overseas, documenting the monthly cost of living (and other details) in each.

The calculator relies on the "50:30:20 rule” which allocates 50% of a retiree’s income toward necessities, such as housing and bills, 30% to wants—including dining, entertainment, travel, and so on, and the final 20% to financial goals, such as savings and paying off debt.

International Living’s Overseas Retirement Calculator is a free, anonymous tool—users need not divulge name or email address to use it.

For more than 40 years, International Living has been the leading source for intelligence about the world's best places to retire…spots where the sun shines more often, folks can live safely and happily, and the overall cost of living is far lower than it is in the U.S.

Results the calculator generates include choices from within International Living’s top picks in Europe, Latin America, and Southeast Asia—including, for instance, Portugal, Panama and Malaysia.

Portugal takes the top spot overall in InternationalLiving.com’s 2020 Annual Global Retirement Index. It topped the categories of Healthcare, Climate, and Housing while scoring well in the Fitting In/Entertainment and Development categories.

Long under the radar for North American expats, the country offers old-world romance at an affordable price. Think cobblestone alleys, medieval town walls, and crenelated castles on hilltops, all soundtracked by the toll of church bells. Not in a touristy, contrived way, but as the standard day-to-day life of the country. It exudes history, beauty, and slow-paced living that is—by any standard other than financial—rich.

Although expats needn’t be rich to enjoy it. Those on the ground report that their expenses here run to about one-third of what they were on the States. And when it comes to the Healthcare, Portugal has some of the finest doctors and medical training available anywhere.

As a retirement destination, Portugal is simply fantastic—but it is also a top candidate for digital nomads. Guimarães in northern Portugal is an increasing popular choice amongst expats. The former Roman city was chosen by the first king of Portugal in 1128 as his administrative base. Today it is designated a UNESCO World Heritage Site. A couple can live well here on $2,250 a month.

Conjuring up all the mysteries of Asia, Malaysia is a former British colony that remains as colorful as ever. Beyond the lofty skyscrapers of the capital, Kuala Lumpur, its dramatic canvas is embroidered with tropical beaches, mountains, dense rainforest, and vividly green tea plantations.

The healthcare is so good—and affordable—typically it attracts over a million medical tourists a year. It’s no wonder almost 200,000 expats now call this modern, warm-weather nation home.
Penang Island, a small, tropical spot off the west coast of peninsular Malaysia, is a remarkable place. It has it all—arts and culture, history and nature, beach and jungle.

A former outpost of the British empire, expats find getting by in English is a breeze and the locals are friendly and welcoming. Known as a foodie haven, Penang’s capital, George Town, is home to eclectic architecture, a vibrant art scene and what many claim is the best street food in the world.

The city offers luxurious living at bargain prices—making it possible to upgrade a retirement here and enjoy a high quality of life for less. On a budget of $1,455 a month a couple can live well but up that to $2,500 a month, and a couple can live in luxury. Rent in a modern highrise with a pool, a gym, and security guards will cost between $750 and $800.

Panama has been a consistent top finisher in International Living’s annual Global Retirement Index every year. For a small country, it packs a real punch. But what makes it really special from the expat retiree’s point of view is its Pensionado program.

“Panama’s Pensionado program deserves the praise it gets,” says Jessica Ramesch, IL Panama Editor. “It offers foreign pensioners an easy ‘in’ to becoming legal residents of Panama. Year after year, Panama ranks highly in the index’s Benefits and Discount and Visas and Residence categories.”

As a retirement destination, Panama is an all-round smart choice—the U.S. is well-served with direct flights, the capital is a vibrant, cosmopolitan city and the country provides affordable, good-quality healthcare—but it is also a business mecca for retirees who want to further develop money-making ideas in their golden years.

On top of that, sunshine is year-round in Panama, with a mild, tropical climate, which means expats can get out in the open any day of the year and never worry about ice, snow, or even hurricanes.

Panama City, Panama is a modern metropolis that calls Miami to mind, but which costs a small fraction of what life there does. A couple can live comfortably, in a rented two-bedroom apartment in a central area, on a budget of $1,750 a month. A budget of $2,900 a month would fund a more lavish lifestyle and splashier apartment. In Miami, that figure would scarcely cover rent alone.