War Can Take a Man’s Best Years, But Grant Him His Greatest Friends

Xulon Press presents a work of historical fiction told from the heart of a soldier. 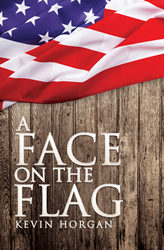 A Face on the Flag is a tribute to veterans and the friendships they carry through life.

Horgan tells the story of war through the eyes of Clem Reeger, a man who has lost everything. Veterans will appreciate the sharp differences in the gravity of pain that compatriots carry, while recognizing their personal availability to their friends is crucial to seeing each other through the dark hours.

Kevin Horgan served as a USMC infantry officer from 1979 to 1984, and graciously donates fifty percent of his royalties to veteran support groups and charities. He is the author of two U.S. Civil War historical novels: The March of the 18th: A Story of Crippled Heroes in the Civil War (2013) and The March of the Orphans: and the Battle of Stones River (2015).

Xulon Press, a division of Salem Media Group, is the world’s largest Christian self-publisher, with more than 15,000 titles published to date. A Face on the Flag is available online through xulonpress.com/bookstore, amazon.com, and barnesandnoble.com.