Warren M. Mueller’s Newly Released “The Sons of Light” is an Epic Novel of Otherworldly Magical Beings Caught in a Battle of Good Versus Evil

“The Sons of Light” from Christian Faith Publishing author Warren M. Mueller is a canon-worthy tale filled with enchantment, mysticism, and allure. 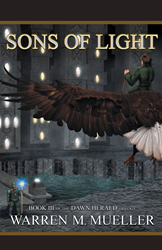 “The Sons of Light”: a gripping book that tells of stories containing magic, drama, and conflict. “The Sons of Light” is the creation of published author, Warren M. Mueller, a passionate writer with two MS degrees from the University of Wisconsin; a consultant and an environmental specialist for a Midwestern utility company; and a loving husband, father, and grandfather.

Mueller shares, “The Dawn Herald Trilogy concludes with the revelation of the identities of the twelve sons of light.

The survivors of the fall of the last stronghold resisting the Brotherhood of Andhun seek refuge among the elves in the Valley of Glainne. A council is called during which the Creator appears as a shimmering globe of light. Tom, Oriana, Min and others receive different telepathic instructions about quests that they must complete before the sons of light are revealed. Thus, begins several parallel stories that converge in a climactic battle as the armies of Devlin surround and invade the Forbidden Mountains, which holds a glowing slab of rock with magical powers.

Don’t miss the conclusion of this exciting adventure in which an ancient prophecy is fulfilled and selected beings are transformed into sons of light that herald a new age in the history of the earth.”

Published by Christian Faith Publishing, Warren M. Mueller’s new book is a grand saga that readers will surely find to be highly entertaining and electrifying.

Follow the riveting adventures of extraordinary beings implicated by prophecies and an impending war that will decide the fate of their realm.

View a synopsis of “The Sons of Light” on YouTube.

Consumers can purchase “The Sons of Light” at traditional brick & mortar bookstores, or online at Amazon.com, Apple iTunes store, or Barnes and Noble.

For additional information or inquiries about “The Sons of Light”, contact the Christian Faith Publishing media department at 866-554-0919.