“Moment by Moment I Pray: Volume II” from Christian Faith Publishing author Warren S. Banks chronicles the life of the author from September 2016 until April 2017 and his journey of walking along God’s path. 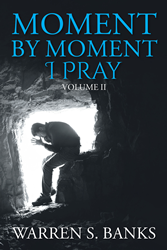 Banks shares, “This is part 2 of Moment by Moment, I Pray, which deals with my praying life from September 1, 2016–April 30, 2017. The story behind part 2 is the same as that of part 1, which dealt with my prayer life from February 10, 2016 and ends on August 31, 2016. I found myself alone after the funeral of my beloved wife, Annie Jewel (Chief) Banks. We had been together almost fifty years. The funeral was held on Monday, January 5, 2015, at Ben Hill UMC, located in the heart of the Ben Hill community. After a forty-plus-mile drive to our birth home of Griffin, Georgia, she was laid to rest. Three days after her funeral, I took my original manuscript from a storage area in the house that we had made our home and had raised our family and went out into the backyard and destroyed all twenty-six thousand handwritten pages. I did not see the need to continue writing or to live. But that was January 8, 2015. I looked up into the heavens and asked the Lord what he wanted me to do. I said, Lord, I have pulled myself up from a small town in the state of Georgia named Griffin, Georgia. I had completed Fairmont High School, entered Clark College (now known as Clark Atlanta University); completion date was May 1970; completed Woodrow Wilson College of Law, Georgia State University Schools of Education for my first teacher’s certification to teach school and the School of Management.

“From 1966–1970, I completed my degree in sociology and psychology. During my senior year at Clark, I married the love of my life, Miss Annie Jewel Hosely, my high school sweetheart, also from Griffin, Georgia. We set up housekeeping in Atlanta, Georgia. But in January 1971, I was drafted into the Army and I was shipped to the Republic of South Vietnam to serve a tour of duty, as a squad leader, in a military police unit. I worked very hard and I was promoted to the rank of sergeant E5. I survived Vietnam and many other situations, but Chief’s death took a toll upon the very essence of my soul. But on February 12, 2016, I started back writing, and after a talk with the Lord, on September 17, 2018, I had handwritten about three thousand pages. At this point, I asked the Lord, ‘Lord, what do you want me to do?’ A soft but firm voice came to me, ‘Warren, my son, I want you to publish your story, which you have written in the form of a continued prayer.’ Well, looking back upon my life, the Lord has always been there for me, even when I thought my life was over.

“About seven days later, I was listening to my favorite gospel radio station. I heard his message, ‘If you are considering publishing your manuscript, call this number or go to this website.’ I was not quick enough to get the information down; therefore, I missed out on getting the information that I needed to make my contact. But a few days later, while I was again listening to the same radio station, that same message came again. This time, I was able to get the information that I needed and I made the contact. Within the next few minutes, I received a phone call. The person on the other end of the line said that she had been assigned from the Christian Faith Publishing Company to serve as my literary agent. I was told that she would me my guide throughout the production process. I was given information that I needed to mail my manuscript to. I mailed my manuscript off to the address that was given to me. Within a few days, I got a call from my agent indicating that my manuscript had been accepted for publication. I was really beside myself. I have been in constant prayer with my Lord and Savior, Jesus Christ. He saw so much more in me than I saw in myself. He said that he would never leave me nor forsake me, and he never has.”

Published by Christian Faith Publishing, Warren S. Banks’s new book is the poignant tale of a life that found light amidst the darkness of his personal struggles and embarked on a journey of worship. In this book, readers will have a glimpse of his transformed life.

View a synopsis of “Moment by Moment I Pray: Volume II” on YouTube.

Consumers can purchase “Moment by Moment I Pray: Volume II” at traditional brick & mortar bookstores, or online at Amazon.com, Apple iTunes store, or Barnes and Noble.

For additional information or inquiries about “Moment by Moment I Pray: Volume II,” contact the Christian Faith Publishing media department at 866-554-0919.